Helle Thorning-Schmidt is currently CEO of the charity Save the Children.[1] She is the former Prime Minister of Denmark (3 October 2011 to 19 June 2015) and Leader of the Social Democrats, the first woman to hold either post.

On 18 June 2015, in Denmark's general election, Thorning-Schmidt's governing SDP was the biggest party, winning 26.3% of the vote, the right-wing Danish People's Party won 21.1% of the vote, and ex-PM Lars Lokke Rasmussen's Denmark Liberal Party came third on 19.5%. However, her coalition allies failed to gain as much of the vote as those of the opposition and she stood down as Prime Minister after conceding victory.[2]

On 10 December 2013, at Nelson Mandela's memorial service in Soweto, Helle Thorning-Schmidt took a photograph on her mobile phone which immediately made worldwide news. According to the Daily Mirror:

"A memorial would not normally be regarded as the right place to pose for a ‘selfie’.
"But a grinning David Cameron and Barack Obama did just that during the memorial for Nelson Mandela.
"The two leaders squeezed up as Danish Prime Minister Helle Thorning-Schmidt took the snap on her camera phone.
"Within minutes the photograph of the three leaders posing for the ‘selfie’ went viral on the internet, staking its claim to become the most famous - if controversial - taken so far."[3]

Thorning-Schmidt holds degrees in political science from the University of Copenhagen and the College of Europe in Belgium where she met fellow student and future husband Stephen Kinnock, son of the former Leader of the Labour Party, Neil Kinnock.[4]

On 7 May 2015, Helle Thorning-Schmidt attended the counting of votes when husband Stephen Kinnock was elected Labour Member of Parliament for Aberavon in South Wales.[5]

On 16 September 2016, Helle Thorning-Schmidt was reported to have applied to Batley and Spen Constituency Labour Party to be selected as candidate to succeed the murdered MP Jo Cox in the forthcoming by-election.[6] The following week, it was announced that the by-election would take place on 20 October 2016 and that former soap-actress Tracy Brabin had been selected as Labour's prospective parliamentary candidate.[7]

Helle Thorning-Schmidt was born in Rødovre to Holger Thorning-Schmidt, a lecturer in mathematics and national economics at the University of Copenhagen, and his wife Grete. Her parents were both politically conservative[8] and she grew up in the Copenhagen suburb of Ishøj. She attended Ishøj Gymnasium, from which she graduated in 1985. Her parents divorced when she was 10 years old.[9]

Thorning-Schmidt studied political science at University of Copenhagen, earning a cand.scient.pol. degree in 1994. She also holds a master's degree in European studies specialising in policy and public administration from the College of Europe in Bruges, Belgium, where she studied from 1992 to 1993 (she is an alumna of the Charles IV College of Europe.[10] At the time, Denmark had a quota administered by the Ministry of Foreign Affairs of one student at this prestigious institution, and Thorning-Schmidt was selected.[11] In addition to her native Danish, she speaks fluent English and French.

She became a social democrat during her studies in Belgium and joined the Social Democratic Party in 1993.[12]

Member of the Folketing

In the 2005 Danish parliamentary election, Helle Thorning-Schmidt was elected to the Folketing.

Leader of the Social Democrats

After the defeat in the 2005 election, in which the Social Democrats lost five seats and failed to regain the majority it had lost in the 2001 election, former Finance Minister and party leader Mogens Lykketoft resigned his post, taking responsibility for the poor election results. In his speech of resignation on election night, 8 February 2005, he called for a leadership election in order to determine who should lead the party into the next election.[15]

Thorning-Schmidt campaigned for the party leadership as a moderate candidate and was elected by the party members on 12 April 2005, ahead of the other candidate, Frank Jensen. She led the Social Democrats in the 2007 election, in which her party suffered modest losses and was forced into a third term in opposition. The party was also unable to regain its position as the largest party in the Folketing.[16]

She was against holding a referendum on the European Reform Treaty.[17] During her 2007 campaign she promised to relax restrictions on asylum seekers and immigrants.[18] She also opposed tax cuts announced by Anders Fogh Rasmussen, instead stating she would like to see more funding for welfare. The party also campaigned on a platform of combating increased inequalities in society, and fighting global warming by supplying 45% of Denmark's energy from renewable sources by 2025.[19]

Although her party again lost two seats in the 2007 election reducing the total to 45 seats, her leadership was not questioned by her party.[20] In June 2008, according to a Gallup poll, the opposition centre-left was at 49.8% compared to 49.6% for the centre-right. This would leave the centre-left with 88 seats, two short of a majority, discounting the Faroe Islands and Greenland seats.[21] Since late 2009 the opposition enjoyed large majorities in the polls, and according to polls carried out in January 2011 the opposition led the governing coalition under Lars Løkke Rasmussen by 5–7 points and the Social Democrats led the Liberal Party (Venstre) by 7–10 points which would make the Social Democrats the largest party by far in the Folketing.[22]

Both Margrethe Vestager (Danish Social Liberal Party) and Villy Søvndal (Socialist People's Party) pledged their support to Thorning-Schmidt after a potential election victory.[23] After the 2007 Danish parliamentary election Helle Thorning-Schmidt started working towards forming a centre-left government coalition consisting of the Socialist People's Party and the Social Liberal Party with parliamentary support from the small Red-Green Alliance.[24][25] As the leader of the largest opposition party in Denmark, she was described by the media as the leader of the Danish opposition.[26]

In the 2011 parliamentary election, she was re-elected to parliament. Although the ruling Venstre Liberal Party became the largest party and gained a seat and the Social Democrats lost a seat, the opposition parties combined obtained more seats than the government coalition. Her four-party bloc gained a majority of 89 seats in the 179-seat parliament against 86 for the sitting Prime Minister and his centre-right parliamentary supporters.[27] Prime Minister Lars Løkke Rasmussen formally tendered his resignation to Queen Margrethe on 16 September 2011. Rasmussen's cabinet remained in office as a caretaker government[28] until 3 October, when Helle Thorning-Schmidt was appointed Prime Minister by the Queen following negotiations with the other opposition parties.

Helle Thorning-Schmidt officially began her first term as Prime Minister on 3 October 2011, after having presented her cabinet to the Queen and having received her official appointment.[29] Thorning-Schmidt has pursued a centrist compromise agenda, building several reforms with support from both sides of the Folketing. This has caused friction with the supporting Red-Green Alliance, which has been kept outside of influence.[30]

Thorning-Schmidt presided over the successful conclusion of NATO's strike missions in Libya, to which Denmark was a contributor, less than three weeks after taking office.[31]

During the first year in office her government has rolled back anti-immigration legislation enacted by the previous government,[32] and passed a tax-reform with support from the liberal-conservative opposition.[33] The tax reform raised the top tax threshold, effectively lowering tax rates for high income earners.[34] The aim of the tax reform has been to increase labour output to fend off a projected shortage within the next decades. The stated goal is to entice Danes to work more in order to compensate for the decreasing workforce, by lowering tax on wages and gradually lowering welfare payments to those outside of the labour market to increase the economic benefit of working relative to receiving welfare.[35]

On 9 August 2013, Thorning-Schmidt made a cabinet reshuffle. 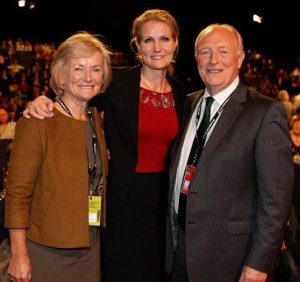 Helle Thorning-Schmidt married Stephen Kinnock in 1996, so becoming the daughter-in-law of Neil Kinnock, former leader of the British Labour Party and European Commissioner, and Glenys Kinnock, former British Minister for Europe. She met her husband while they were both attending the College of Europe. They have two daughters, Johanna and Camilla. Helle lives in Copenhagen with their children, while her husband resided in Davos, Switzerland, where he worked as a director for the World Economic Forum.[36]

The Danish tax authorities (SKAT) investigated reports that Thorning-Schmidt's husband, Stephen Kinnock, was alleged to have evaded payment of income tax. Kinnock had declared that he was not a resident of Denmark and thus not subject to Danish taxes, while at the same time Thorning-Schmidt had declared, in an application for dispensation for Kinnock to own property in Denmark, that he resided in Denmark "every weekend of the year from Friday through Monday".[37] Thorning-Schmidt attributed the discrepancy to a "big and sloppy error". On 16 September 2010, Danish tax authorities dropped the charges.[38]

A week before the 15 September 2011 elections to the Danish Parliament, the 2010 decision from SKAT (the taxation department) surfaced in the Danish tabloid B.T. The case had been leaked to the newspaper several months previously. It turned out that from 2000 to 2008 Thorning-Schmidt had made use of tax deductions applicable to her husband, even though he was not subject to Danish taxes and had no income in Denmark. The mistake was corrected by SKAT for the three years from 2006 to 2008, and Thorning-Schmidt paid the amount she had saved due to the error. She was however not required to pay the amounts saved for the six years from 2000 to 2005, because of the statutory time limit for liability in such cases.[39]

In November 2011 the daily Politiken disclosed that Tax Ministry deputy chief Peter Loft had attended several meetings attending to the Thorning-Schmidt case and had tried to insert comments into the final resolution text. This would be unlawful under Danish law as the Tax Ministry may not interfere with the decisions taken in individual tax cases.[40] This set off a flurry of speculation in the press, as to whether there had been any political pressure from the then government to pursue a stricter course in the tax case. Tax Minister in the new government Thor Möger Pedersen subsequently asked Peter Loft and the director of the revenue service's Copenhagen branch, Erling Andersen, to give a report on the happenings. On 2 December, Pedersen disclosed that he had found such big discrepancies in the two reports that he would set up a commission of inquiry to determine the actual course of events.[41]

Further controversy erupted when two days later the tabloid daily, Ekstra Bladet, reported that they had also been offered the confidential information that was made public during the election campaign. The source of the leak was determined to be Peter Arnfeldt, spin doctor for then Minister for Taxation Troels Lund Poulsen.[42] This led to intense media speculation that the former government, and specifically Troels Lund Poulsen, were engaged in leaking confidential tax information and trying to pressure the revenue service into changing its decision in the case, in an active attempt to discredit the opposition leader in the then imminent election. This would constitute a hitherto unseen level of abuse of power in Danish political life. The commission of inquiry that had already been announced two days previously, was broadly supported by the Danish Parliament to also look into whether the former government was involved in, or knew of, the leak.[43] On the same day Troels Lund Poulsen announced he would be taking an indefinite leave of absence from the Danish Parliament. Peter Arnfeldt has been reported to the police by the Ministry for Taxation. In March 2012 Peter Loft was suspended from his post as deputy chief, for the duration of the two-year investigation period.[44]

This page imported content from Wikipedia on 22 August 2013.
Wikipedia is not affiliated with Wikispooks.   Original page source here
Retrieved from "https://wikispooks.com/w/index.php?title=Helle_Thorning-Schmidt&oldid=196377"
Categories: