Friends of Europe (FoU) is a Brussels-based, non-profit think-tank for European Union policy analysis and debate, as a bridge between policymakers and the business community, facilitating "engagement with leaders at the heart of Brussels policy making" to "stimulate new thinking on the issues facing Europe and its citizens". The lobby group, established in 1999, has no political or national allegiance and is independent of the EU institutions.

FoU sees itself as a "bridge between policymakers and those who experience the implementation and impact of policy making, including citizens, the business community and wider civil society."

On the board of trustees are EU commissioners, heads of government and EU parliamentarians, alongside representatives of the business community. These institutionalized contacts with important decision-makers at EU level give the business lobby the opportunity to informally influence EU politics in their interest. This particularly affects laws and regulations regulating the industries in which Friends of Europe members work.Its area of expertise are listed as:

FoU claims "to seek the widest-possible participation in terms of views, geographical diversity, demographics and kinds of stakeholders including NGOs and businesses, policymakers and thought leaders," but noticeably absent is any popular input.

The President Etienne Davignon, is a former EU Commissioner and Vice President of the EU Commission, a central Bilderberger and is active on a large number of management boards of large companies and their networks. As EU Commissioner, he even participated in the establishment and organization of the European Roundtable of Industrialists (ERT). The founder and chairman Giles Merritt has founded other lobby-related organizations.

Debating Security Plus (DS+)is FoU's "global online brainstorm", supported by the United States European Command(EUCOM), pulling together "thousands of participants, and their recommendations were fed into the policy thinking that shaped NATO’s Strategic Concept in 2010 and the EU’s Global Strategy in 2016".

FoE runs a European Young Leaders program[1] to handpick a new generation of leaders, "able to tackle the increasing disconnects between citizens and political elites, to rebuild the trust that is vital to democracies." To be noted is Friends of Europe doesn't think this is a matter of there being something wrong with actual policies, but is a matter of finding reliable faces to "rebuild the trust" in the population.

It intends to "stimulate promising young talent to engage in the politics by providing them with the tools (network, leadership development and knowledge) to become active and influential European citizens (meaning recruiting them to the pro-EU circuit, "tap into a network", which can be very lucrative).

In addition to the Cariplo Foundation and the John S. Latsis Foundation, the program is sponsored by the Coca Cola Company and - tellingly - The United States European Command, the U.S. military forces in Europe.[2]

Every year, the new class of European Young Leaders is invited to meet during two 3-day seminars that take place in symbolic European cities. They are joined by the alumni of the programme, together with unspecified "decision-makers, stakeholders and key European actors", to "discuss issues of common concern and develop concrete proposals and recommendations to tackle the challenges facing Europe and its citizens."

Faced with Europe’s migration crisis and the election of Donald Trump in the United States, Friends of Europe decided to expand the programme with Young Leaders from North America and from the Middle East and North Africa to meet and discuss issues of common concern with their European counterparts.

Friends of Europe has two kinds of membership, individual and 'VIP'. VIP members are described as 'partners' and include a range of corporations and neoliberal think tanks from throughout Europe. [3] 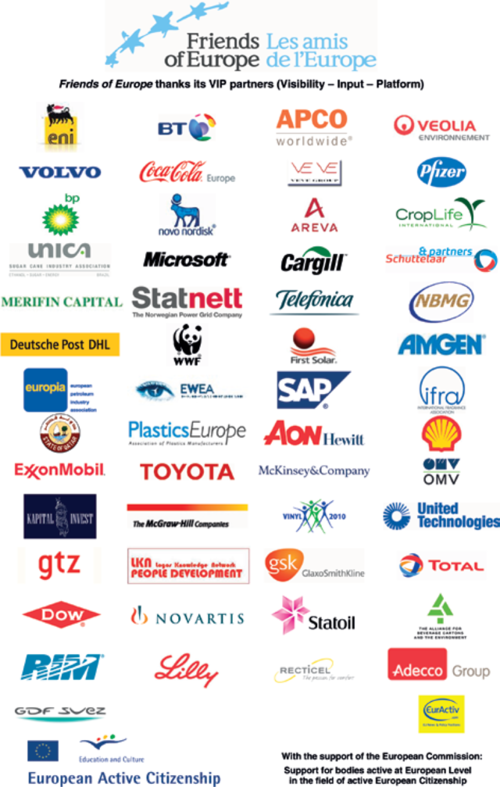