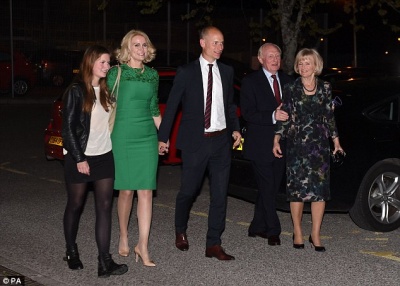 Stephen Nathan Kinnock (born 1 January 1970) is a British Labour Party politician who was elected Member of Parliament (MP) for Aberavon in the 2015 General Election.[1] On 9 April 2020, Keir Starmer appointed Stephen Kinnock Shadow Minister for Asia and the Pacific in the Foreign and Commonwealth Office. @WarmongerHodges tweeted:

After attending Drayton Manor High School, and having achieved a degree in Modern Languages from Queens' College, Cambridge, Stephen Kinnock won a scholarship to study at the College of Europe in Bruges, Belgium, where he met fellow student Helle and gained an MA. Kinnock worked as a research assistant at the European Parliament in Brussels before becoming a British Council Development and Training Services executive based in Brussels from 1997.

From January 2009 he was employed by the World Economic Forum based in Geneva, Switzerland, as director, head of Europe and Central Asia.[7]

In August 2012 Kinnock took up a position at Xyntéo in London, a business advisory company that helps global businesses go beyond the green basics and reinvent the way they grow. Kinnock is managing director of the "Global Leadership and Technology Exchange",[8] a partnership which aims to bring together some of the world's leading businesses to discuss and act upon routes that can be taken to bring about resource-efficient growth.[9][10]

In March 2014 it was announced that Stephen Kinnock had been selected as the Labour Party candidate for the seat of Aberavon in Wales for the General Election of 2015.[11]

He has been referred to as a "red prince", being one of several sons of senior Labour Party figures to have been selected for safe seats.[12]

On 7 May 2015 Stephen Kinnock, son of former Labour leader Neil Kinnock romped home to victory in the Aberavon constituency in south Wales - beating nearest rivals the Tories by more than 10,000 votes. The 45-year-old beamed with delight after hearing the news in Neath Sports Centre and hugged wife Helle Thorning-Schmidt who, until 18 June 2015, was Prime Minister of Denmark.[13] Kinnock said he was proud to be following in his father's footsteps in becoming an MP - but wanted to be known for his own achievements. In a pre-election interview with the Daily Mirror, he described himself as "a socialist, a democratic socialist”, and voiced his support for trade unions and collective bargaining. He comes from a political dynasty – along with his father, his sister Rachel works for Ed Miliband and his mother Glenys was a Labour MEP.

And he insisted being married to the Danish leader would not distract him from his duties as MP:

“I will be a Westminster MP from Monday to Thursday and in my constituency on the weekend. We'll have to roll up our sleeves and get stuck in next week,” he said. “If we are in Opposition, that's what we'll have to do."[14]

On 3 June 2015, in a parliamentary debate on devolution watched by his father Neil and mother Glenys, Stephen Kinnock made his maiden speech in the House of Commons:

"I was born about 30 miles to the north east of Aberavon, in Tredegar, as was my father. My mother is of course from another country altogether known as north Wales They have always worked tirelessly to combat injustice and their dedication to public service has inspired me throughout my life."

Stephen Kinnock said he saw himself as "a global Welshman", having lived in many exotic lands, including England:

"I believe Wales is a nation with the ability to punch far above its weight and I hope that I will have an opportunity to contribute to that worthy cause."[15]

Stephen Kinnock was born in Tredegar, the son of Welsh politicians Glenys and Neil Kinnock.[16] He has been married to former Prime Minister of Denmark Helle Thorning-Schmidt since 1996. The couple have two daughters Johanna and Camilla.[17]

In June 2010, the Danish tabloid B.T. accused Kinnock of tax evasion.[18] At that time he was paying tax in Switzerland where his workplace was situated, and therefore had his main residence there, although his wife's political website states that "The family lives in Østerbro in Copenhagen".[19] The couple had previously stated to the media that Kinnock would spend his weekends in Denmark, sometimes including Thursday, and that he regarded his home and base as being exclusively with his family in Copenhagen. According to the tabloid, he would possibly exceed 183 days a year in Denmark, meaning he would be fully taxable there.

Helle Thorning-Schmidt repudiated the accusations but said the couple would ask the Danish tax authority for an audit.[20][21] The audit by the Danish Tax & Customs Administration (SKAT) was concluded on 17 September 2010, and in its Official Report SKAT stated that "Mr Kinnock does not have tax liability for 2007, 08, or 09, as he does not reside in this country within the meaning of the Danish Tax at Sources Act".[22][23] 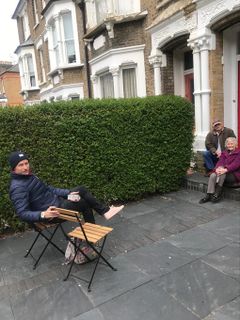 In March 2020, Nation.Cymru reported that Stephen Kinnock had been told off by South Wales Police online after he travelled to his father Neil Kinnock’s house in apparent conflict with the social distancing rules introduced by the Welsh Government to control the COVID-19 outbreak.[24]

"Dad turned 78 today. Incredible, but true. @HelleThorning_S and I took a couple of chairs over, and sat in their front garden for a socially distanced celebration. As you do 🙂Happy birthday, mate."[25]

"Hello @SKinnock we know celebrating your Dad’s birthday is a lovely thing to do, however this is not essential travel. We all have our part to play in this, we urge you to comply with @GOVUK restrictions, they are in place to keep us all safe. Thank you. ^cy"[26]

"I felt that this was essential travel as I had to deliver some necessary supplies to my parents. I stayed long enough to sing ‘happy birthday’ to Dad, and then I was off. All the best, Stephen."[27]

This page imported content from Wikipedia on 11 May 2015.
Wikipedia is not affiliated with Wikispooks.   Original page source here
Retrieved from "https://wikispooks.com/w/index.php?title=Stephen_Kinnock&oldid=186741"
Categories: