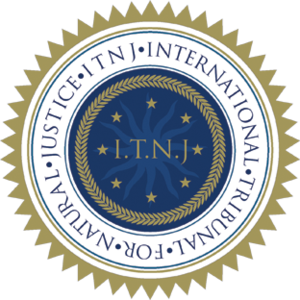 The International Tribunal of Natural Justice (ITNJ) is a London-based group founded in 2015 via the New Earth Project. It crowdfunded around $38,000 for VIPaedophile investigations. It may have been an establishment response to Operation: Death Eaters.[1]

"We live in a world where government and finance has taken over every part of our lives – elected representatives are working for corporations funding their campaigns, police use violence towards the public in the interest of “public safety,” and what we are told is the justice system has become so corrupt that it refuses to follow its own rules…

So, the time has come to ask ourselves one critical question:
“If I ignore the warning signs and don’t do what I can to fix these problems now… what kind of world am I leaving to our children and grandchildren?”"[2]

The website did not appear, as of December 2019 to state who set up the group, but stated that "the ITNJ belongs to the People and is not controlled by any nation, state, corporation, or ‘special interests’."[3]

Sacha Stone,[4] Caleb Skinner, John Walsh and Rebecca Cope are tentatively listed as founders above on the strength of a now deleted blog post by El Coyote[5] on the Hoaxtead Research website.[6] 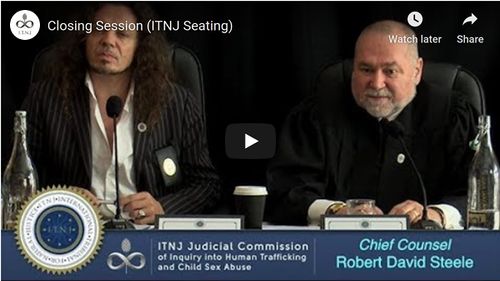 Screenshot of a video of Robert David Steele as Chief Counsel

The website included the following as "commissioners", as of December 2019:[7] 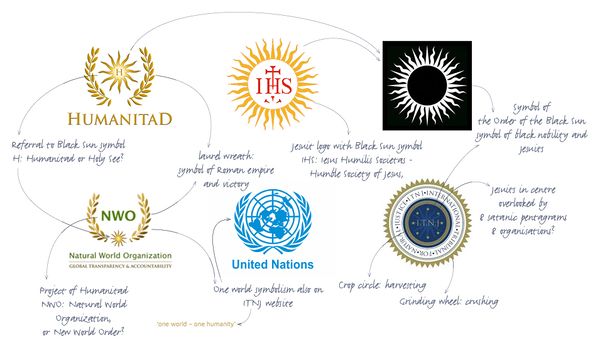 The ITNJ reports that its first "official hearing" took place on December 1, 2015 and states that "In homage to its overriding commitment to Truth and transparency, the ITNJ is committed to video-recording all proceedings and live-streaming hearings and trials whenever possible, with all video recordings archived for public access."[9] 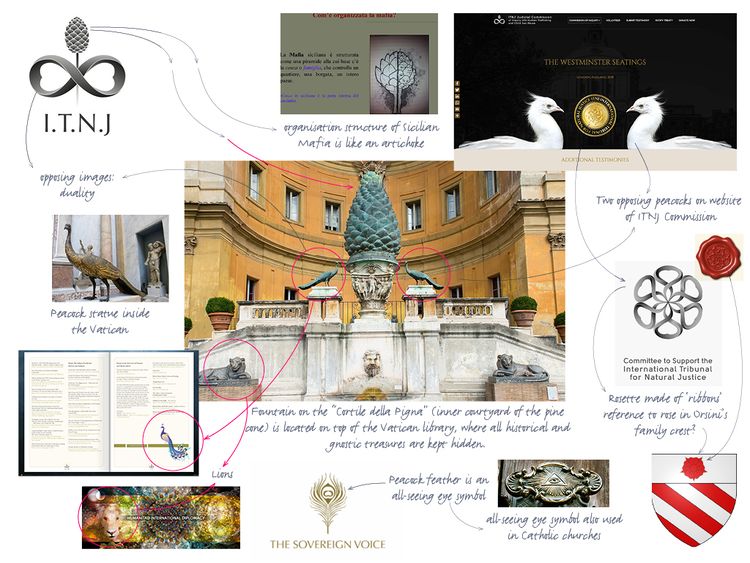 'Ella Ster' wrote: "The pine cone symbolises that the Catholic Church hijacked humanity’s enlightenment and replaced it with a religious surrogate. In order to better understand the symbolism of the pine cone I went looking for a photo of the square with this pine cone statue. When I saw the picture I immediately understood the two facing peacocks, as we also see them on the ITNJ’s website. It is all hidden in plain sight. The peacocks on the square are the guardians of the Vatican’s secrets. Why would the ITNJ use symbolism that refers to exactly this location and this criminal institute, unless they represent their interests?"

In December 2019, 'Ella Ster' stated that the "symbolism of the ITNJ is full of references to Jesuits, the Vatican, black nobility and Freemasons."[10]

In December 2019, The group's website stated that the "“City of London” is a one-mile square territory which is a sovereign city-state, completely separate from London".