Noam Chomsky is an eloquent and renowned critic of US foreign policy. He states that The United States is the Biggest Terrorist State in the World[1] but is a firm supporter of the the US government's official narrative of what happened on September 11, 2001. His failure to address the issue of false flag terror has led many to term him as a gatekeeper.

Noam Chomsky refuses to address the reality of deep politics. He has nothing to say about false flag attacks and other such deep events. He once exclaimed "Even if it were true [that 9/11 was an inside job], which is extremely unlikely, who cares? I mean, it doesn’t have any significance."[2][3] It is interesting that the foundation funded Democracy Now! repeatedly chooses Chomsky to interview about 9/11.[4]

In December 2019 Chomsky was listed as an advocate of the International Tribunal of Natural Justice.[5]

In November 2017, the International Peace Bureau announced that Noam Chomsky had been awarded the MacBride Peace Prize "for his tireless commitment to peace, his strong critiques to US foreign policy, and his anti-imperialism."

Chomsky has been properly described as “a genuine people’s hero, an inspiration for struggles all over the world for that basic decency known as freedom”, as “one of the greatest and most radical public thinkers of our time”, “one of the most significant challengers of unjust power and delusions”, and as a ‘guru’ for the world’s anti-capitalist and anti-imperialist movement. In recent years, in addition to his continuing contributions to the fields of linguistics, philosophy and cognitive science, his critiques have focused on the US post-9-11 “War on Terror” which has provided cover for a continuation of US imperial policies, and the imperative of addressing the dangers posed by nuclear weapons and climate change.[6]

A Quote by Noam Chomsky 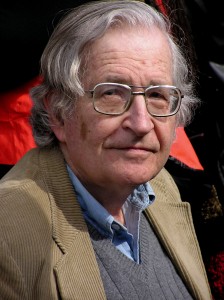 +
Display lifespan
Born 7 December 1928 +
Has almaMater
University of Pennsylvania +
Has amazon
https://www.amazon.co.uk/Noam-Chomsky/e/B000AP81EC/ +
Has bilderbergCount
0 +
Has birthPlace
Philadelphia +, Pennsylvania +  and United States +
Has cercleCount
0 +
Has child
Aviva +, Diane +  and Harry +
Has fullPageName
Noam Chomsky +
Has fullPageNamee
Noam_Chomsky +
Has image