Joanne Kate Swinson is a British politician who was Leader of the Liberal Democrats since 22 July 2019 until she resigned on 13 December 2019. She was the first woman and the youngest person to hold the position. She has been the Member of Parliament for East Dunbartonshire since the UK/2017 General Election, having previously held the seat between the 2005 and 2015 General Elections. Jo Swinson was defeated by Amy Callaghan of the SNP at the UK/2019 General Election.[1]

Swinson studied at the London School of Economics, and briefly worked in public relations, before being elected to the House of Commons, becoming the youngest MP at the time.[2] She was the Liberal Democrats' Spokesperson covering various portfolios, including Scotland, Women and Equalities, Communities and Local Government, and Foreign and Commonwealth Affairs.[3]

In 2010, after the Liberal Democrats entered into a Cameron–Clegg coalition government with the Conservative Party, Swinson served as a Parliamentary Private Secretary to Deputy Prime Minister Nick Clegg, and was later appointed Parliamentary Under Secretary of State for Employment Relations and Postal Affairs.[4]

She lost her seat in the 2015 General Election, but regained it in the snap election held two years later. 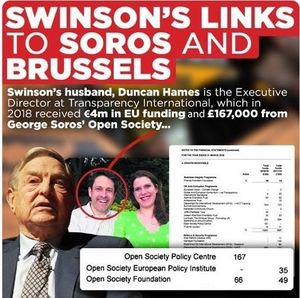 In September 2019, having campaigned for a second EU Referendum, Jo Swinson announced that the Lib Dems will be revoking Article 50 if they win a majority at the next General Election. She also declared that she won’t under any circumstances help put Jeremy Corbyn into Downing Street, even if that would ensure a second referendum takes place.[6]

"Any reason why this scandal is being completely ignored by your news editors: 'Swinson fails to declare family company was given 4m euro by the EU'?"

"Swinson's links to Soros and Brussels...

"Swinson's husband Duncan Hames is the Executive Director of Transparency International, which in 2018 received €4m in EU funding and £167,000 from George Soros' Open Society..."[7]

This page imported content from Wikipedia on 2 August 2019.
Wikipedia is not affiliated with Wikispooks.   Original page source here
Retrieved from "https://wikispooks.com/w/index.php?title=Jo_Swinson&oldid=243770"
Categories: