Not to be confused with fellow Bilderberger, the Canadian economist John Deutsch.

John M. Deutch is a former CIA Director who was offered evidence of CIA Drug dealing by Mike Ruppert in 1996. He choose not to act upon it.

John Deutch became Director of Central Intelligence in May 1995. The New York Times reported in July 1995 that on his appointment, Deutch "moved quickly to change things, Frederick Hitz Inspector General of the Central Intelligence Agency was the only senior official who kept his job."[1] 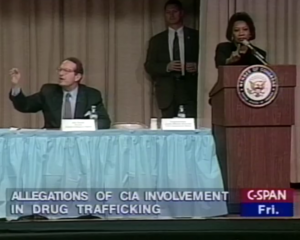 Deutch having to answer to the angered black community of south central LA.[2]

On November 15, 1996, Deutch was at Locke High School in Los Angeles at a town hall meeting on the topic of drug dealing. He was visibly taken aback by the confrontational testimony from an LAPD narcotics officer, Michael Ruppert, that he had personally witnessed CIA complicity in drug dealing,[3] naming Operation Amadeus,[4][5][6][7] Operation Pegasus[8] and Operation Watchtower.

Deutch left the CIA on December 15, 1996 and later that year it was revealed that several of his laptop computers contained classified materials designated as unclassified. In January 1997, the CIA began a formal security investigation of the matter. Senior management at CIA declined to fully pursue the security breach. Over two years after his departure, the matter was referred to the Department of Justice, where US Attorney General Janet Reno declined prosecution. She did, however, recommend an investigation to determine whether Deutch should retain his security clearance.[9] President Clinton pardoned Deutch on his last day in office.[10]