Crown Prince Louis Rwagasore (10 January 1932 – 13 October 1961) was a Burundian Royal and politician who is considered a significant figure in the history of Burundi nationalism. He was Prime Minister, and was assassinated, very likely by the Belgians, shortly before Burundian independence.

Louis Rwagasore was the son of Mwami (king) Mwambutsa IV and his first wife, Thérèse Kayonga.[citation needed] He attended Groupe Scolaire d'Astrida (now Groupe Scolaire Officiel de Butare) in Rwanda.[1] He briefly attended university in Belgium, but left to spearhead his country's anti-colonial movement. He founded a series of African cooperatives to encourage economic independence, but these were quickly banned by Belgium in 1958.

That same year, the prince established a nationalist political movement, Union for National Progress (UPRONA). Believing that the role of the royal family should transcend partisan politics, his father promoted him to Chief of Butanyerera, but Rwagasore turned down the appointment so that he could devote himself fully to the nationalist cause. Rwagasore, a high class Ganwa,[2] married a woman who most people thought was a Hutu. It is believed that Rwagasore did so in a bid to play down the ethnic divisions between ethnic groups, especially between Tutsi and Hutu, which he believed the Belgian colonial rule had pitched against one another. At the first UPRONA Congress in March 1960, Rwagasore demanded complete independence for Burundi and called on the local population to boycott Belgian stores and refuse to pay taxes. Because of these calls for civil disobedience, he was placed under house arrest.

Despite setbacks, UPRONA won a clear victory in elections for the colony's legislative assembly on 8 September 1961, winning 80 per cent of the vote. The next day, Rwagasore was declared prime minister, with a mandate to prepare the country for independence.[3] 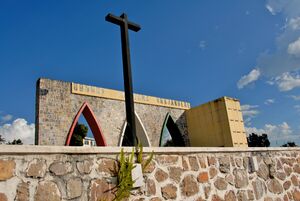 Just two weeks later, on 13 October 1961, Rwagasore was assassinated while dining at the Hotel club du Lac Tanganyika which is located in the coast of the Lake Tanganyika in Bujumbura.

The assassin, a Greek national named Ioannis Kageorgis, was accompanied by three Burundians, all members of the pro-Belgian Christian Democratic Party (PDC). Within three days, all four suspects were arrested and they quickly implicated two high-ranking members of the PDC (Jean-Baptiste Ntidendereza and Joseph Biroli), with one initially admitting his guilt but later retracting his confession.[4] Following the assassination inter-ethnic rivalries between the Hutu and Tutsi within UPRONA flared.

Historians have suggested that the Belgian colonial authorities may have played a significant role in the assassination although no official inquiry has ever been carried out. As early as the 1970s, René Lemarchand, an expert on Burundian history, claimed that the PDC's European secretary, Ms Belva, was allegedly told by the Belgian regent Roberto Régnier that "Rwagasore must be killed".[5] In addition, several days before his assassination, Rwagasore filled a complaint against seven Belgian officials including the Belgian Governor-General, Jean-Paul Harroy and Régnier.[6] Before being executed for the murder, Kageorgis explicitly accused Harroy and Régnier of responsibility.[7]

In 2011 the Belgian journalist, Guy Poppe, published De moord op Rwagasore, de Burundese Lumumba (The Death of Rwagasore, the Burundian Lumumba) which claimed that irregularities in the investigation of the Prince's murder included, among other details, a lack of questioning of witnesses including Harroy, Régnier, Kageorgis' Belgian fiancee, and Ms. Belva. Poppe discovered that files from the Belgian Ministry of Foreign Affairs's archives, including a transcript from an interview that was conducted with Régnier following his return to Belgium from Burundi, had been lost.[8] Poppe also claimed that the Foreign Ministry had threatened to fire three former colonial officers if they traveled to Burundi in order to testify during Kageorgis' trial.[9] Poppe noted the investigation's failure to follow up links between the Burundian PDC party and the Belgian Christian Social Party (PSC-CVP).[10]

According to sociologist Ludo De Witte, documents discovered in the national archives of the United Kingdom could lead to the conclusion of an involvement of the Belgians in the assassination of Prince Rwagasore[11].

In October 2018, Burundi officially accused Belgium to be responsible of the assassination.[12]

Prince Louis Rwagasore Stadium was named in his honour and the football club Prince Louis FC. His tomb was constructed on the hills overlooking Bujumbura and consists of a memorial with three arches. The original inscription above the arches read "Dieu, Roi, Patrie" (God, King, Country).[citation needed] 13 October is a public holiday in Burundi, in his memory. His portrait appears since independence in the 100 franc banknote.