The original March Against Fear was launched in Memphis, Tennessee on 6 June 1966 by American civil rights activist James Meredith and finished 220 miles away with 15,000 marchers (including Martin Luther King) in Jackson, Mississippi on 26 June 1966.[1] 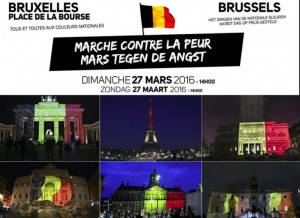 Fifty years on, another March Against Fear was planned for Easter Sunday, 27 March 2016 to mark the mass murder in Brussels. However, the organisers cancelled the event following a public plea from Belgium's Interior Minister Jan Jambon asking for the demonstration to be postponed while ongoing police investigations continued:

In a statement on Easter Saturday, the organisers said:

“We understand this request. The security of our citizens is an absolute priority. We join the authorities in proposing a delay and ask people not to come this Sunday.”

"Is everyone taking note on how the false flag script is developing? Apparently staged attacks that take place in Europe are followed up by these weird 'anti-fear' marches which only serve to bring more attention to the false flag event and 'state-sponsored terrorism'. It’s all part of the terrorism propaganda, fear and social engineering that the state is exerting over the masses on their road to their new global order. The irony of seeing the March Against Fear cancelled by 'fear' itself only goes to show that there is nothing genuine and organic about this effort. It also shows us that the state, not the people, is controlling these events."[3]