“We must build dikes of courage to hold back the flood of fear.”
MLK [1]

Fear, and its less acute associated emotion, stress, have been extensively studied by intelligence agencies to facilitate their effective exploitation to achieve deep political ends, through methods such as the strategy of tension, applied by NATO's Operation Gladio and Operation Gladio/B projects. People's enemy images have been nurtured, sometimes over generations (for example, based on race or nationalism), a tactic which is proving unstable given the increase in global inter-communication arising from the internet.

“There are two ways in which people are controlled: first of all frighten them, and then demoralise them. An educated healthy, and confident nation is harder to govern.”
Tony Benn [2]

Acute fear is an emotion which promotes the release of stress hormones such as adrenaline, cortisol and norepinephrine. These increase heart rate and muscle strength by diverting resources away from longer term survival needs such as reproductive drive, immunity, digestion and growth. While this facilitates the body's natural "fight or flight" response system which facilitates handling of immediate threats.[3] These stress hormones are a natural but maladaptive response to the sort of chronic stress endemic in most parts of the world. It is a moot point to what extent this has been deliberately engineered as a means of social control. 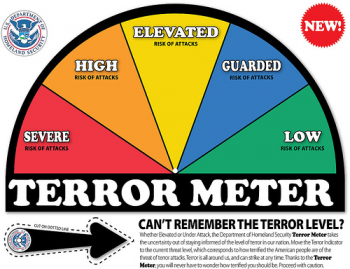 The "war on terror" - which less disingenuously could be called a "war of terror" - is a strategy of tension which aims to subject a population and stifle opposition by promoting fear of "terrorism". After 9/11, the anti-globalization movement was suffered a crucial blow because “Some of the NGOs and nonprofits were really worried about seeming un-American... [which reversed the trend of increasing numbers at protests]... the anti-globalization movement never made a comeback."[4]

While the number of direct fatalities of the war on terror is relatively small, approximately 0.25% of the number of people killed by road accidents[5] the unlikeliness of being personally affected does not stop people's fear response being engaged, especially when the commercially-controlled media give saturation coverage of "terrorism". The number of direct victims need only be a tiny fraction of the victimised population if commercially-controlled media is on board with the project of stoking fear. Citizens in the USA are more afraid of "terrorism" than any other national population.[6]

Big media & The "Culture of fear"

Jeff Schechtman refers to a "culture of fear in the United States" while Sasha Ambramsky claims that small fears that are used, in conjunction with the commercially-controlled media, to amplify what he terms the “fog of fear.” [7] This leads to misperceptions of risk. A 2015 a Gallup poll showed 70% of US respondents believe crime has gone up since 2014, with 63% reporting crime had risen from 2013 levels.[8]

Sarah Sands, later editor of the BBC's Radio 4 Today programme, authored a revealing policy memo in the mid 1990s while working for The Telegraph. In it she urged the editor, Charles Moore to "play on people's fears." She wrote that "the middle classes want to read about unemployment and negative equity and juvenile delinquency. We should be basically friendly and fair minded but then take people aback with ferocious militia-style attacks ... the Mail gets the best out of people through fear."[9] 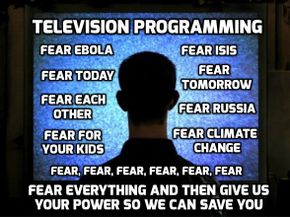 Television, by facilitating the dissemination of images of violence, has been a useful tool to promote fear.

Overall, social engineering is most advanced in the USA, so this is a particularly informative society in which to note the importance of fear.

Shiraz Maher (Bilderberg 2015), a "terror expert" who wrote a "horrifying account of his experience with COVID-19", after catching a case "classified as “mild” by British health authorities".

COVID-19 is a respiratory illness caused by a coronavirus similar to influenza. It has a survival rate of well over 99% and is not particularly deadly for the young and healthy. Nevertheless, in early 2020 it was presented as a killer pandemic and Tedros Ghebreyesus quoted an infection fatality rate of 3.4%. Commercially-controlled media consistently played up fear of the virus.

In 2018, the majority of US teenagers were worried about the possibility of a mass shooting. A WhoWhatWhy article was entitled In 2019, Active Shooter Drills Are The New Fire Drills In Schools.[10] 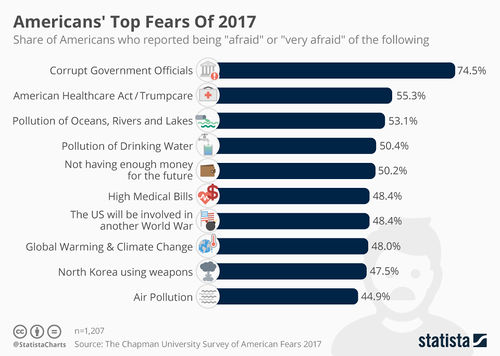 Evidence of an increasing failure of "terrorism" to scare people - and of increasing distrust of the official narrative - was provided by a 2017 survey of the attitudes of 1207 US adults, which revealed their greatest fear to be "corrupt government officials".[11]

In the 21st century, the public of many nations are constantly reminded of the need to be 'alert' or 'vigilant' for potential "terrorists". This, despite the fact that "terrorism" poses a tiny actual danger when compared to events such as traffic accidents[12] and the more serious long term problems such as emerging diseases or climate change.

Fear of safety of children

In the last generation, fear for the safety of children in USA has mushroomed.[13] In 2015 in the USA two adults discovered a neighbour's 4-year-old child playing alone at an outdoor playground, less than 50 metres from his front door. When he refused to go home as he wasn't finished playing, their fear for his safety lead them to call the police. The police declared that they thought the mother's behaviour amounted to criminal neglect. The "justice" system seems likely to decree said that his mother must serve months in jail (prosecutors rejected a month plea deal). As her lawyer noted, had the incident happened 20 years ago, no one would have been charged and the police would not have been called.[14]

In USA, an annual poll of the public's fears revealed #1 to be fear of "corrupt government officials", which in 2017 stood at 75%, up 15% from 2016. This correlates with a 2014 academic study which concluded that US is a de facto dictatorship - that the will of the public is not correlated with which legislation gets passed.[15]