Reverend Dr. Martin Luther King Jr was a key figure in the 1960s in USA. A popular proponent of non-violence, he was spied upon by the deep state who saw danger in his popularity and refusal to be cowed by their threats. He was assassinated on 4 April 1968. At the time, the killing was blamed on a "lone nut", although a 1999 civil trial by jury concluded that he had been killed by a conspiracy including agents of the US government.

Opposition by the US Deep state

The US Deep state recognised that MLK was a man of integrity of great charisma, with large ambitions to facilitate social change who might be difficult to control. They therefore used assets in the US governments to frustrate him.[2]

Martin Luther King was subject to harassment from the FBI, who wrote him an anonymous note, suggesting that he commit suicide. They also termed him, in a now declassified internal memo, "the most dangerous negro... in the country".

Declassified documents reveal that Martin Luther King was a subject of special surveillance by the NSA.[4] 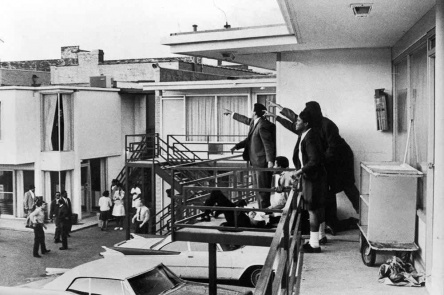 Witnesses point in the direction of the assassin as King lies at their feet.

When other tactics failed, the US Deep state resorted to assassination. They developed a plan to assassinate him in California[citation needed]. However, the ongoing plan to assassinate RFK lead them to change it to Memphis, so as to avoid having two murders so close in both time and space. Martin Luther King was assassinated exactly one year after condemning U.S. imperialist wars, covert violence and capitalism in a New York sermon that made bold headlines in newspapers around the world.

The official narrative (according to a 1999 lawsuit brought by Dr. William Pepper in Memphis) is that Martin Luther King was assassinated by a conspiracy involving unnamed members of the US government. This was a remarkable lapse for a system usually able to control such official pronouncements. The commercially-controlled media showed a pronounced disinterest at the time, and have ignored or tried to undermine the jury's unanimous verdict ever since.

“He who lives with untruth lives in spiritual slavery. Freedom is still the bonus we receive for knowing the truth.”
MLK [5]