He was a sought for adviser to central banks and politicians in 1980s and 90s.[2][3] He was chairman of Princeton Economics International and the Foundation for the Study of Cycles.

After refusing to hand over the source code for his economic forecasting program[4] and phone recordings,[5] he was charged for operating a ponzi scheme[6] and held in contempt of court for a total of seven years[7][8] after the initial charges against him proved to be indefensible.[9][10] An attempt on his life was made during his time in prison from which he nearly died.[11] 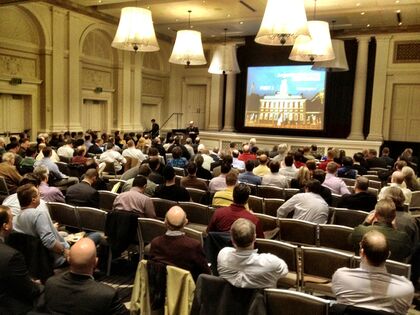 One of the first conferences after his release from jail.

A documentary from 2014 directed by Marcus Vetter and co-produced by Arte tells the story of Armstrong's financial model, his imprisonment, release and comeback (download[12]). The film was, according to Armstrong, insured by Lloyds of London against slander and libel, thus the presented facts would hold up in a court of law.[13]

In his view, the economic decline brought about by the Corona virus crisis is a deliberate attempt to bring the world economy into a position where strong changes are more readily accepted. In a blog post from 7th July 2020 he questions: "if there will even be free elections post-2024 given what the computer is projecting".[14][15] From his analysis he concludes that "World War is coming [in the] 2025-2027 time period".[16]

A Quote by Martin Armstrong