“As the Establishment feels its grip slipping, as people wake up to the appalling economic exploitation by the few that underlies the very foundations of modern western society, expect the methods used by the security services to become even dirtier. You can bank on continued ramping up of Russophobia to supply “the enemy”. As both Scottish Independence and Jeremy Corbyn are viewed as real threats by the British Establishment, you can anticipate every possible kind of dirty trick in the next couple of years, with increasing frequency and audacity.”
Craig Murray (December 2018)  [1]

2020 has been an exciting, frightening and unprecedented year so far for many people. Helen Buyniski in RT wrote that it "is a terrible time to be a free speech advocate".[2]

A 2017 story in the Telegraph stated that "MI6 has created its first-ever cinema advert aimed at attracting more women and ethnic minorities into the secret service", and that it "is expected to grow from 2,500 people to close to 3,500 by 2020."[3]

It was first reported in Decmber 2019 in Wuhan. On 11 January 2020, China published a full gene sequence of the virus.

The Western commercially-controlled media initially promoted an official narrative of COVID-19 as having arisen from zoonotic transfer after consumption of bushmeat by Chinese in Wuhan. The scientific literature of "gain of function" research on coronaviruses by members of the Wuhan Institute of Virology was something of a third rail topic.[4]

Some commentators linked the emergence of Covid-19 to the sudden and unexplained closure of Fort Detrick, a BSL-4 facility in USA. In April 2020, the Western media abruptly changed their official narrative to suggest that the virus may have emerged from the WIV.

In February the highly contagious nature of the virus became clear after the disease spread widely through asymptomatic transmission in South Korea.

On Janury 15, the CDC issued warnings on pneumonia. Later in January the CDC explicitly prohibited test for COVID-19.

On February 2, the US banned entry of all Chinese nationals, and foreign nationals who had been in China in the previous 14 days. During F

On 2 March stopped releasing data on tests and deaths related to COVID. 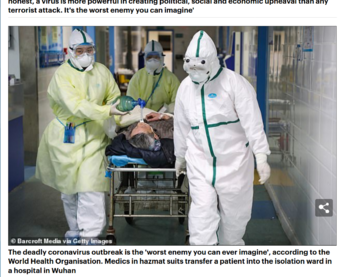 In January and February 2020, disturbing images of the virus were published from China. On 11 March 2020, the WHO declared the COVID-19 outbreak to be a global pandemic. The WHO secretary general's, Tedros Adhanom Ghebreyesus announced a mortality rate for the virus of "about 3.4%", which fuelled panic about the disease.

In January 2020, the president of the World Jewish Congress, Ronald Lauder stated that "Speeches are not enough to stop antisemitism" and "blamed the internet for spreading hate against Jews, and called for greater legislation to police hate crime".[5]

Censorship was rampant of anyone questioning the official narrative about whether COVID-19 was really the existential threat or whether COVID lockdowns were a helpful response to the virus.

In late March, a US plot to depose Venezuela's President Nicholas Maduro in a coup was exposed, although commercially-controlled media did not report widely about it.[6]

While the excess mortality (most evident in March and April 2020) were within the range of historic pandemics, the social changes that occurred in 2020 were unprecedented in modern history. Generally with only minimal show "democratic" influence, governments around the world -- particularly in the "developed" nations -- afforded themselves the right the violate standing laws and precedents such as limiting freedom of assembly, freedom of movement and even freedom of speech.

Unemployment increased as did suicide and mental health difficulties in general.[citation needed] The murder rate increased 30% in the US.[7]