Since Korean Air Lines Flight 007 had departed from US soil and US nationals had died in the incident, the NTSB was legally required to investigate the crash.[citation needed] However, on the morning of September 1 1983, the NTSB chief in Alaska, James Michelangelo, received an (illegal) order from the NTSB in Washington at the behest of the US State Department requiring that they terminate their investigation and send all documents relating to it to Washington, where the State Department directed an ICAO investigation, a policy which precluded sensitive information from being subpoenaed that might have contradicted the US government's official narrative.[1]

In the case of TWA Flight 800 the NTSB, mindful of the evidence such as the testimony of hundreds of eyewitnesses who reported something like a missile streaking upwards toward the plane just prior to its explosion, passed the case to the FBI. The FBI nevertheless subsequently declared the explosion was a simple accident and not, in fact, a criminal act.[2] 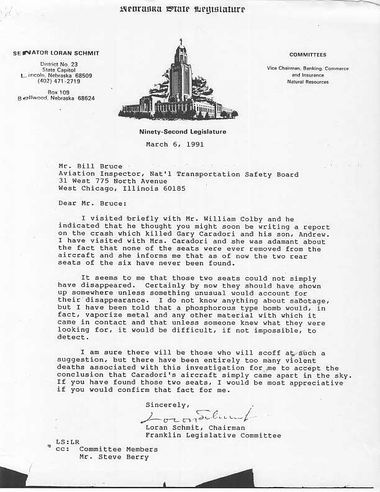 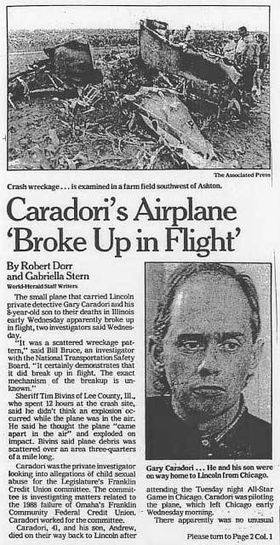 Nebraska State Senator Loran Schmit hired Gary Caradori to investigate the Franklin child prostitution ring. On 11 July 1990, the morning after Caradori phoned to inform him that they now had the subjects of their investigation "by the short hairs"[3], Caradori and his son were killed in a plane crash. Schmit submitted an affidavit stating that he had been warned that Caradori’s life was in danger.[4] The NTSB concluded that the plane broke up in flight due to stress. Schmit was unconvinced, writing to the NTSB that "there have been entirely too many violent deaths associated with this investigation for me accept the conclusion that Caradori's aircraft simply came apart in the sky". In 1991 EIR termed Caradori's crash "suspicious".[5]