TWA Flight 800 was destroyed in July 1996 in a fireball just out of New York. The most expensive NTSB investigation in US history concluded on 23 August 2000 that it exploded due to an internal failure of the plane, so that over 250 eyewitnesses who reported seeing something like a missile were mistaken.[1] Among the 230 dead was Mohammed Samir Ferrat, a businessman who had accompanied the US Commerce Secretary, Ron Brown (who himself died in a suspicious plane crash that April) on a trade mission to Ivory Coast earlier in the year.

TWA Flight 800 spontaneously exploded, probably caused by a random spark igniting one of the gas tanks. All the eyewitnesses who spoke of a missile were mistaken due to an optical illusion. The CIA produced a video explaining how this might look, adding an explanatory message in large text: “There Was No Missile.”[2]

Over 250 people said they saw something streaking toward the plane and then an explosion[2][3][4]. Many believed that the cause of the crash was a surface-to-air missile attack.[5][6][7] 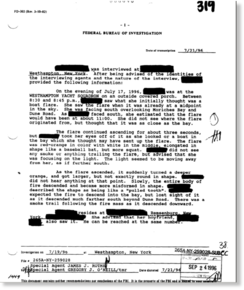 Ron Unz writes that a home video of a missile striking and destroying TWA 800, was sold for more than $50,000 and briefly broadcast on the MSNBC cable news channel before reportedly being seized as evidence by FBI agents.[2]

WhatReallyHappened reported that the US Navy "kicked out the New York Police Department divers, who had legal jurisdiction in the area", and sent its own deep salvage vessels to the area, and searched as wide as searched out 20 miles to either side of the known debris field. Information was leaked by the FBI and the US Navy which implied that there was an object of extreme biological danger aboard Flight 800, one which posed a serious risk to anyone who picked it up. Although later retracted, the story, coupled with reports of bio-suited soldiers along the beaches of Long Island, created the impression that the FBI and NTSB did not want anyone looking too closely at any of the wreckage.[8]

The film Shadows of Liberty includes footage of an early FBI press conference about the fate of TWA Flight 800 at which an activist asked "Why is the navy involved in the recovery when they are a suspect?" By way of answer, the chairman James Kallstrom just pointed at him and declared "Remove him!" and he was summarily manhandled out of the room by 4 or 5 suited men. The commercially-controlled media 'journalists' continued with their set questions as if nothing had happened. AP has uploaded archival footage of that event to Youtube. [9] 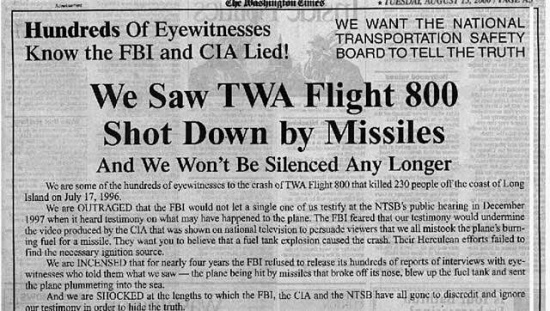 Many witnesses claim to have seen a bright flash streak upwards to the plane just before the explosion. They were not allowed to testify.[1]

Many eye-witnesses claimed they had seen a streak of fire heading towards the plane before it crashed[1] and the initial NTSB investigation concluded that the cause was most likely criminal, so it passed control to the FBI, since the NTSB does not investigate criminal cases.[10] In the case of TWA 800, the FBI initiated a parallel criminal investigation alongside the NTSB's accident investigation.[11]

Henry F. Hughes spoke of "unprecedented interference" in the investigation by other agencies.[12]

The four-year NTSB investigation concluded on August 23, 2000, ending the most expensive air disaster investigation in United States history. It concluded that the crash was caused by a gas tank explosion.[1]

The Associated Retired Aviation Professionals was set up in early 1997[By whom?]. Members include former military, civilian, and aviation professionals who are "committed to independently investigating the mysterious crash of TWA Flight 800". Their website, although dated, contains some pages of evidence and links and was online as of 2017.[13]

The wreckage is permanently stored in a custom-built NTSB facility in Ashburn, Virginia. The reconstructed aircraft is used to train accident investigators.[14][15]

Pilot, accident investigator and author Rodney Stich (who published a book critical of the TWA800 official narrative) notes that safety regulations as regards fuel tanks were not tightened as a result of the event, "providing further support to the fact that no one, including the aircraft manufacturer, believes that a spark was involved".[16]

As evidence of Boeing's position, Rodney Stich quotes a December 9, 1999 The Seattle Times article that "The Boeing Co. said this week that the lack of evidence as to what sparked the blast that downed TWA Flight 800 three years ago points to an "external source," such as a bomb or missile. Boeing's statement in court documents Tuesday is the strongest to date revealing an aggressive legal defense that blames the 747 crash on a bomb or missile—which the FBI and National Transportation Safety Board long ago ruled out."[17]

30 November 2018 Robin  A summary of this highly suspicious deep event.
No definitive conclusion, but an introduction to a deep event which remain undeciphered to this day.