"Open government" is a phrase used by politicians, generally making promises not to keep secret the affairs of state.

After 9-11 in particular, FOIA requests have been given increasingly short shrift.

Publication of information on the WWW by UK government

The UK government has failed fallen short of excellence in its publication of information on WWW.

Following the "unlawful killing" of Diana Spencer, the UK government published court transcripts and all public documentation pertaining to the Diana Spencer/Inquest online at http://www.scottbaker-inquests.gov.uk in 2008. However, it took the site down[Why?] in 2011 and, although it remains available at https://webarchive.nationalarchives.gov.uk/20090607230303/http://www.scottbaker-inquests.gov.uk/hearing_transcripts/index.htm . So far, the government has not managed to link the original domain to the archive, resulting in many broken links.

In 2018, after losing a legal battle against human rights groups Reprieve and Privacy International, the UK government published an annex of the 2016 Investigatory Powers Act about criminal activity by employees of MI5.[1] A single page PDF was published, containing a single scanned image of such low quality that it was difficult to read by humans and might not be indexed by search engines unable to decipher its text: 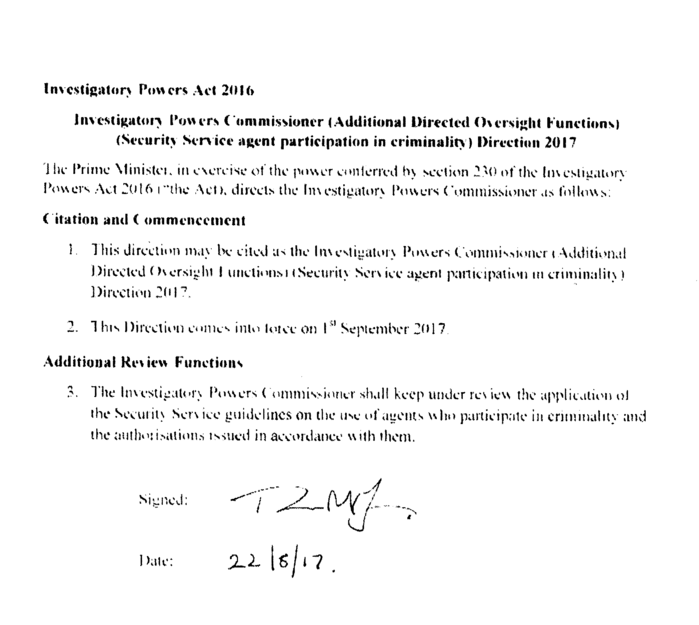 The section of the IPA, as published on March 1st, 2018 by the Investigatory Powers Commissioner's Office.

1. This direction may be cited as the Investigatory Powers Commissioner (Additional Directed Oversight Functions (Security Service participation in criminality) Direction 2017

2. This Direction comes into force on 1st September 2017.

3. The Investigatory Powers Commissioner shall keep under review the application of the Security Service guidelines on the use of agents who participate in criminality and the authorisations issued in accordance with them.