The Socialist Campaign Group (SCG), also known as the Campaign Group, is a left-wing, democratic socialist grouping of Labour Party Members of Parliament in the House of Commons of the United Kingdom.

It was formed in December 1982 following the 1981 Labour Party deputy leadership election when a number of 'soft left' MPs, led by Neil Kinnock, refused to back Tony Benn's campaign, leading a number of left-wing Benn-supporting MPs to split from the Tribune Group to form the Socialist Campaign Group.[1]

It was at a meeting of the Campaign Group in June 2015 that the decision was taken that Jeremy Corbyn would challenge for the leadership of the Labour Party.[2]

The Campaign Group maintains close links with Momentum, trade unions and other left wing campaign groups within and outside of the party. The Socialist Campaign Group Rally is one of the most anticipated events for the Labour left at Labour Party Conference. 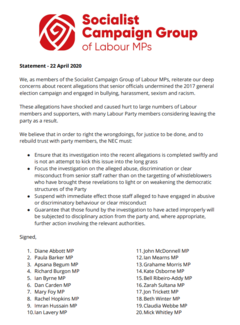 On 22 April 2020 SCG member Richard Burgon posted on his Facebook page a statement expressing concerns about the leaked Labour Party report and calling for swift action to be taken by the NEC against those found to have undermined Labour's General Election campaign:

"I've added my name to this statement from members of the Socialist Campaign Group of Labour MPs ahead of tomorrow's Labour Party NEC meeting.

"This outlines the steps we want to see from the investigation into recent allegations about senior party officials."[3]

On 3 May 2020, SKWAWKBOX reported that Richard Burgon and his allies had fought off an attempt to replace him as SCG Secretary. The attempt was to have been followed by a programme of new joiners from the soft left and centre of the party and was orchestrated by an MP now in a very senior party position, by means of proxies.

Had it been successful, the SCG would have become larger – but its left-wing stance would have been significantly diluted.[4]

This page imported content from Wikipedia on 22 April 2020.
Wikipedia is not affiliated with Wikispooks.   Original page source here
Retrieved from "https://wikispooks.com/w/index.php?title=Socialist_Campaign_Group&oldid=187604"
Categories: