Steven Bell (born 26 February 1951) is an English political cartoonist, whose work appears in The Guardian and other publications.

Steve Bell is probably best known for the daily strip called If..., which has appeared in The Guardian newspaper since 1981, and since the mid-1990s he has also been that newspaper's principal editorial cartoonist.

Collections of his cartoons have been published, and he has also illustrated original books in collaboration with authors. He has made short animated films with Bob Godfrey, including a short series of animated cartoons for Channel 4 television in 1999 to mark the 20th anniversary of Margaret Thatcher's rise to power, entitled Margaret Thatcher – Where Am I Now?

He has appeared in a radio programme about the life of 18th century caricaturist James Gillray. Earlier in his career he wrote and drew the Gremlins comic strip for the British comic Jackpot.[1] 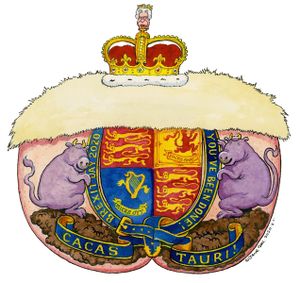 The latest edit to the Steve Bell Wikipedia page is by the controversial WP editor Philip Cross on 7 June 2018.[2]

One thing is for sure. 31 January 2020 won't be forgotten in a hurry. Brexit is arguably the most momentous political decision this country has made since the foundation of the Welfare State in 1945.

What better way is there to commemorate (commiserate) the day we finally got Brexit done than with a fine bone china, limited edition mug by the country's leading political cartoonist, Steve Bell?

Only 3,000 individually numbered mugs are available in this limited edition design, so order quickly to avoid missing out. Orders close at midnight on 31 January 2020.[3]

This page imported content from Wikipedia on 7 June 2018.
Wikipedia is not affiliated with Wikispooks.   Original page source here
Retrieved from "https://wikispooks.com/w/index.php?title=Steve_Bell&oldid=181135"
Categories: