The Massacre at Mazar

The The Massacre at Mazar or Dasht-i-Leili massacre occurred in December 2001 during the U.S. invasion of Afghanistan when 250 to 7,500 Taliban prisoners of war were shot and/or suffocated to death in metal shipping containers while being transferred by forces loyal to General Rashid Dostum.

The degree of complicity from US special forces and how high up the chain of command it goes is still disputed (especially by the US government and corporate media), but the killings happened during a time of widespread American demand for bloody revenge for the perceived Taliban role in the 9/11 false flag event. Another motive might have been to get rid of inconvenient witnesses of earlier cooperation. 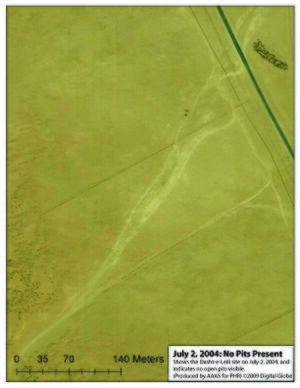 Satellite photos show that the site was dug up some time during 2006 and the fill from them taken away.[1] 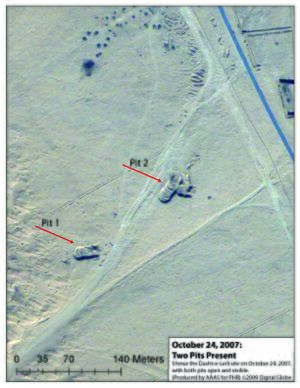 Satellite photos show that the site was dug up some time during 2006 and the fill from them taken away.

In late 2001, around 8,000 Taliban fighters, including Chechens, Pakistanis and Uzbeks as well as suspected members of al-Qaeda, surrendered to the forces of Northern Alliance General Abdul Rashid Dostum, a long time US ally in the war in Afghanistan, after the siege of Kunduz. Several hundred of the prisoners, among them American John Walker Lindh, were taken to Qala-i-Jangi, a fort near Mazar-i-Sharif, where they staged a bloody uprising which took several days to quell. The remaining 7,500 prisoners were loaded into sealed shipping containers for transport to Sheberghan prison.[2] The journey was to last several days in some cases; most of the prisoners did not survive it.

Afghan Massacre: The Convoy of Death

Afghan Massacre: The Convoy of Death[3] is a 2002 documentary by Irish filmmaker Jamie Doran and Afghan journalist Najibullah Quraishi. It presents testimony from interviewees stating that American military personnel were present at and complicit in some of the mass killings.

The film shows an interview with a commander who was one of the chief negotiators of the surrender, saying that several thousand of the soldiers who surrendered are now unaccounted for. He says the prisoners had given themselves up on the understanding that they would be allowed to go home if they gave up their weapons or – in the case of al-Qaeda and foreign fighters – that they would be treated in accordance with UN conventions. Afghan witnesses presented in Afghan Massacre: The Convoy of Death, their faces and voices digitally disguised, recount in sometimes harrowing and graphic detail how most of the prisoners died.

The witnesses state the sealed containers held 200 to 300 men each. They say that when the men in the containers began crying out for air and water, air holes were shot into the sides of the containers, killing several of those inside.[2] A soldier is asked in the documentary: "You specifically shot holes into containers? Who gave you those orders?" He replies: "The commanders ordered me to hit the containers to make holes for ventilation and because of that some of the prisoners were killed."[4]

A truck driver says that half of the people he transported in a container were dead upon arrival.[2] An Afghan taxi driver tells Doran of a visit to a petrol station: "At the time they were taking prisoners from Qaala Zeini to Scheberghan. I went to fill my car with petrol. I smelled something strange and asked the petrol attendant where the smell was coming from. He said 'look behind you', and there were trucks with containers fixed on them. I was surprised. I saw something very strange. Blood was leaking from the containers – they were full of dead bodies."[4]

Reports from survivors of the transports speak of bound men, locked up in the containers for several days without food or drink, having resorted to licking the sweat of each other's bodies, even biting into other prisoners' bodies in their desperation to obtain fluids from any source. The documentary quotes the account an Afghan ex-soldier gave to a Pakistani newspaper, describing what he experienced when the containers were opened: "I shall never forget the sensation as long as I live. It was the most revolting and powerful stench you can imagine: a mixture of faeces, urine, blood, vomit and rotting flesh. It was a smell to make you forget all other smells you have experienced in your life."

Another driver states that he was asked to drive his truck, carrying a container with about 300 men, into the desert; he says those who had not died of asphyxiation were shot, in the presence of 30 or 40 US soldiers watching.[2] The driver put the number of containers he saw in the desert at 25 to 30.[2] Several of the interviewed people claim that US personnel were aware of what was happening to the prisoners after their arrival at Sheberghan, and that some played an active role in the torture and murder of prisoners.[2][5][6]

Najibullah Quraishi states in the film that he saw a video showing American Special Forces personnel observing the dumping of bodies into mass graves in the desert; he says that as he was copying the tape, he was attacked and nearly beaten to death.[2] The film shows Quraishi after his recovery from the beating receiving the Rory Peck Award in London for his camera work in Mazar-i-Sharif. The documentary concludes by saying that several witnesses to the events, including some of those who participated in the programme, had since been killed.[7]

A short early version of the documentary was shown to the European and German Parliaments in June 2002, causing widespread concern in Europe.[8][2][9] Against protests from the United States government, the completed documentary was shown later that year on many countries' national television channels, including German, British, Italian and Australian television. The programme was not screened in the US and received no US media coverage.[2][10][11][12] A Newsweek report in August 2002, based on a leaked UN memo, did confirm some of the details in Doran's documentary, as well as the presence of mass graves in the Dasht-i-Leili desert, but made no mention of the documentary.[9][13][14]

In 2002, Physicians for Human Rights (PHR) led an investigation of alleged mass gravesites at Mazar.[15][16] A UN forensic team found fifteen recently deceased bodies in a six-yard trial trench dug at a 1-acre (4,000 m2) grave site and performed an autopsy on three of them, concluding that they had been the victims of homicide, the cause of death being consistent with suffocation, as described by the eyewitness reports featured in Doran's film.[7] A major Newsweek article on the massacre appeared in August 2002, raising questions about America's responsibility for the war crimes committed by its allies. It quoted Aziz ur Rahman Razekh, director of the Afghan Organization of Human Rights, asserting "with confidence" that "more than a thousand people died in the containers."[17] 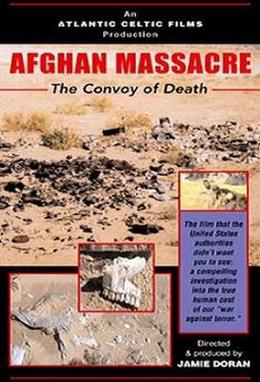 On 10 July 2009, an article on the massacre by Pulitzer Prize-winning journalist James Risen appeared in The New York Times.[18]. Titled U.S. Inaction Seen After Taliban P.O.W.'s Died, the attempted deflection was to blame inaction instead of active participation or quiet encouragement. In a show on Democracy Now!, Risen commented that in writing his article he "tried not to get caught up in something that I think in the past has slowed down some of the efforts by journalists to look into this. I think in the past one of the mistakes some journalists made was to try and prove a direct involvement by the U.S. personnel in the massacre itself. I frankly don't believe that any U.S. military personnel were involved in the massacre. And, you know, U.S. Special Forces troops who were traveling with Dostum have long maintained that they knew nothing about this. And, you know, so I tried not to go down that road."[19] He added that "the investigation should focus rather on what happened afterwards in the Bush administration."[7]

Allegations of American involvement were also disputed by Robert Young Pelton, who had been in the area reporting for National Geographic and CNN. Pelton also said the number of prisoners who suffocated in the containers was roughly 250, a far smaller number than alleged in Doran's documentary. He claims he saw US medics treating some of the prisoners. He says some of the bodies may be victims of the Taliban or of Malik's executions in the 1990s.[20]

"We [the U.S. and Northern Alliance] could have wiped out every Talib on earth and no one would have cared" . . . "There is no cover-up because nothing happened." . . . "There are not that many bodies at Dasht-i-Leili" - Robert Young Pelton[20]

A New York Times editorial on 14 July 2009 called the Bush administration's refusal to investigate a "sordid legacy".[21] Noting that Dostum was "on the CIA payroll and his militia worked closely with United States Special Forces in the early days of the war", the editorial asked President Obama to "order a full investigation into the massacre. The site must be guarded and witnesses protected."[21] Edward S. Herman, writing in Z Magazine, commented that this renewed interest by The New York Times in the massacre, after a 7-year silence on the matter, was rather late in coming and coincided with Dostum's restoration to a position of power in Afghanistan prior to the August 2009 elections, in a move that the U.S. administration disapproved of.[22] Herman said that The New York Times had essentially looked whichever way the current U.S. administration had wanted it to look for the best part of a decade, and that this was also "part of the sordid legacy of the New York Times."[22]

Afghan Massacre: The Convoy of Death is available on archive.org