World War I was marketed for the masses as the "war to end all wars" or the Great War.

The immediate proximate cause - the casus belli - was the assassination of Archduke Franz Ferdinand of Austria in Sarajevo by a young student, Gavrilo Princip, acting in concert with a few other members of a small but (allegedly) isolated group of Bosnian Serb nationalist "lone nuts". The assassination provided a bellicose Germany with an excuse to support Austria Hungary in forcefully holding the Serbian authorities to account, knowing that in doing so it would provoke France, Russia and Britain beyond endurance. In other words, that Germany engineered events in order to to justify pre-planned military aggression and the subjugation of the rest of Europe - and in so doing, took everyone by surprise. Root causes of the war are said to have been German militarism, German expansionism, the Kaiser’s bombastic nature and ambitions, and the last straw: Germany’s invasion of innocent, neutral Belgium.

Gerry Docherty and James MacGregor argue that this official narrative is a deliberately concocted lie. While the sacrifice, heroism, the horrendous waste of life and the misery that ensued were and are all too real, the reasons why it all began and why it was prolonged beyond 1915 has been successfully covered up for a century. Britain, not Germany, was responsible for the war, they suggest, a truth so potentially damaging to the UK deep state that it had to be kept hidden at all costs.[1]

The global dominance of the British Empire reached its zenith through the last quarter of the nineteenth century. That is the essential background to understanding how the war came about. Germany, with its growing industrial strength; its early exploitation and adoption of oil - especially for naval vessel propulsion; and its push for overland access to the newly discovered Middle-Eastern oilfields, was viewed with increasing alarm by the deep state architects and arbiters of Empire, who began to develop secret plans and alliances to remove the threat. A ruinous war between Russia and Germany would be the optimum solution; failing that a wider war in which Germany would be crushed. 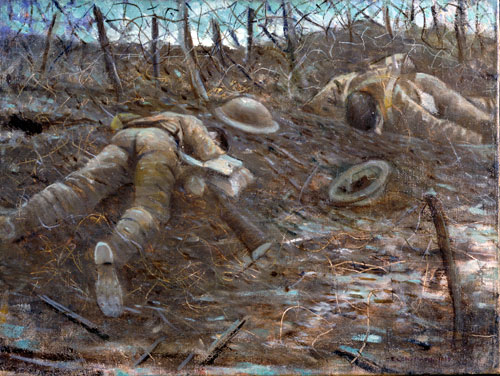 A close-knit secretive group of unscrupulous men, whose roots and origins were in the UK, were intent on both defending and expanding Britain's existing imperial dominance of much of the world against actual or potential challenge. In the decade or so preceding war, Germany was seen as a serious looming challenge that would have to be dealt with. Vast personal fortunes were involved. The self-justifications of this group are expressed in the social philosophy of John Ruskin and propagandised in the stirring prose and poetry of Rudyard Kipling. The entire world was to be ruled, through the benign subjugation of lesser races, by an enlightened Anglo-Saxon empire whose functionaries were enjoined to "take up the White Man's burden". This group of men, organised and tasked in the manner of an elite secret society, deliberately sought and planned for war to crush Germany between France and Russia, and orchestrated events in order to bring this about.

The horror of World War I cast a long shadow over the world. It inspired Salmon Levinson to work towards outlawing war. His ambitions were realised in 1928 with the signing of the Kellogg–Briand Pact.