For the first half century since 1945, the official narrative of US Foreign Policy was dominated by the Cold War, the story of USA/USSR locked in ideological opposition. Since the end of the USSR, this conflict has been reframed as a global War On Terrorism. With a few dissenters the commercially-controlled media have worked hard to tell a story of USA as a noble defender of the poor and underprivileged.

Full article: US Bombing campaigns since 1945 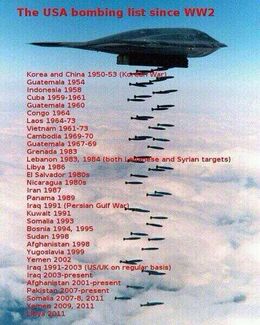 US has carried out numerous bombing campaigns, generally preferring to do so under a framework of multi-national "humanitarian intervention" where practicable.

Full article: US Foreign Assassinations since 1945

US has carried out numerous assassinations since 1945, and since the case of Anwar Al Awlaqi continues to do so, openly, now claiming that there is nothing illegal in targeting and summary execution without a judge or jury.

Full article: US Efforts to Suppress Democracy since 1945

US efforts to suppress democracy are never framed as such by the commercially-controlled media. Instead, memes such as the defence of vital US interests prevail. Older methods such as funding and arming small groups are not forgotten but are mixed with newer tactics such as strategic disinformation and use of social media. 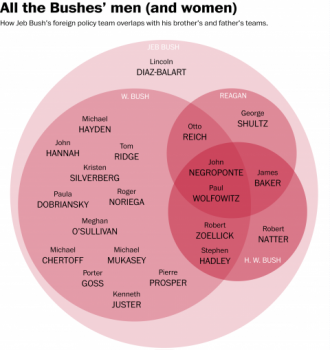 US efforts to secure government change/overthrow in countries deemed obstacles to the US policy under their current governments. The nature of targetted governments does not matter. The only criterion is failure to "see things the US way". The modus operandi has remained largely unchanged for decades and includes: Ample funding of opposition groups under the auspices of "The National Endowment for Democracy" (NED) and a raft of other commercially controlled NGO's; covert support for violently subversive groups; Carefully orchestrated and controlled Orwellian propaganda against targetted governments through the Western commercially-controlled media