From Wikispooks
< 2001 Anthrax attacks
Jump to navigation Jump to search

NBC's Tom Brokaw was one of the targets in the first mailing.

A timeline puts events in their proper sequence and is essential for the understanding of the anthrax attacks of 2001. The anthrax letter attacks occurred in September and October 2001, but the alleged culprit wasn't identified by the FBI and the Department of Justice until August 2008, nearly seven years later. The FBI's investigation of the alleged mailer of the lethal letters was performed out of public view, and, as a result it appeared to some that the FBI only identified Dr. Bruce Edwards Ivins as the culprit after Ivins committed suicide on July 27, 2008. The timeline shows that Ivins was mentioned in FBI reports as an "extremely sensitive suspect" on April 11, 2007. Other events in 2001 and 2002 show that Dr. Ivins was allegedly attempting to mislead the investigation by submitting unusable or false samples from the flask that was later determined to be the "murder weapon". The timeline also shows that the Ames strain used in the attacks was originally thought to be a common strain from Iowa, and it wasn't until months later that it was learned it was a rare strain from Texas - a key fact which became critical to the investigation.

The timeline also shows the sequence of events which led to Dr. Steven Jay Hatfill being identified by Attorney General John Ashcroft as a "person of interest" in August 2002. Many or most news reports after that time appear to ignore what the timeline shows: Starting within weeks after the discovery of the anthrax letters, a group of scientists playing amateur detectives, later joined by the media and some politicians, tried for eight months to get Dr. Hatfill publicly investigated by the FBI, claiming the FBI was "covering up" for the suspect who they didn't publicly name but identified by description, while the FBI kept repeating over and over that they had no firm suspects and that the theories of the amateur detectives and the media reporters were incorrect.

The timeline also shows that the way the events unfolded in the media have little to do with the actual sequence of events. The first case reported in the media was Bob Stevens in Florida, causing many people to assume that the culprit was in Florida at the time. But, later it was realized that the first cases actually occurred in New York City. They were just initially incorrectly diagnosed. Due to the timing of her case, Kathy Nguyen's inhalation infection was thought by many to be the result of cross-contamination from the second mailing in October 2001. But looking at the timeline one can see that her case is more likely related to the cluster of cutaneous cases and accidental exposures in New York City that occurred around the time Nguyen was infected and in the same general area of New York City where she was infected - all of which are known to be related to the first mailing, which occurred in September. 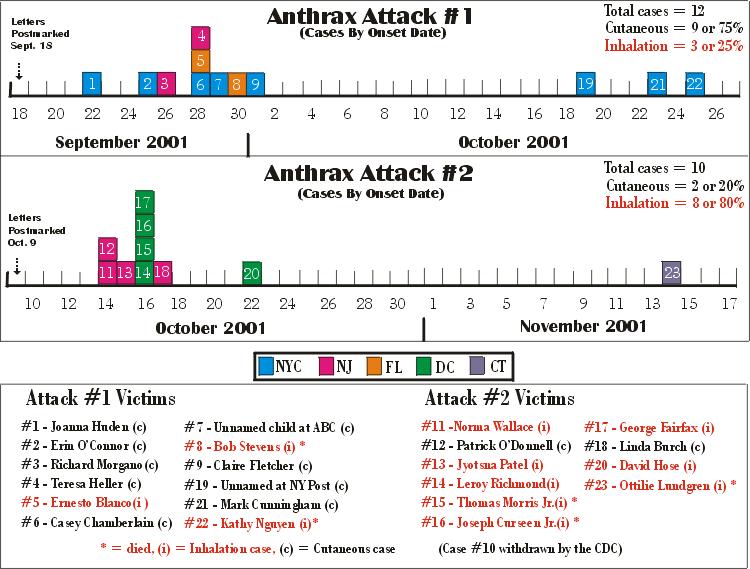 This page imported content from Deletionpedia on 30 March 2014‎.
Deletionpedia is not affiliated with Wikispooks.   Original page source here
Retrieved from "https://wikispooks.com/w/index.php?title=2001_Anthrax_attacks/Timeline&oldid=219426"
Category: