Fort Detrick is a United States Army Medical Command installation 50 miles from Washington D.C. in the Maryland town of Frederick where it is the largest employer.[1] It was the centre of the US Biological Weapon Testing program from 1943-1969, and houses a BSL-4 facility that some have suggested was the original source of the COVID-19 virus.[2]

As of the early 2010s, Fort Detrick's campus supports a multi-governmental community that conducts biomedical research and development, medical materiel management, global medical communications and the study of foreign plant pathogens. It is home to the United States Army Medical Research and Materiel Command (USAMRMC), with its bio-defence agency, the US Army Medical Research Institute of Infectious Diseases (USAMRIID). Fort Detrick also hosts the National Cancer Institute-Frederick (NCI-Frederick)[3] and is home to the National Interagency Confederation for Biological Research (NICBR)[4] and National Interagency Biodefence Campus (NIBC).

After 9-11, highly weaponised anthrax spores were mailed to US senators who were querying the Patriot Act. The commercially-controlled media initially blamed Al-Qaeda. However, it quickly emerged that the anthrax was of the Ames strain, unavailable outside of the US and a few close allies. The FBI later concluded that it originated from Fort Detrick, and pointed the finger at a "lone nut" researcher, Bruce Ivins. The nominal head of the FBI investigation, Richard Lambert, blew the whistle to alert his superiors that evidence indicative of Ivins' innocence had been covered up, which only emerged years later after he took more legal action.[5]

"In 2009, research at the institute in Fort Detrick was suspended because it was storing pathogens not listed in its database."[6][7]

On 7 August 2019[8] the Centers for Disease Control and Prevention (CDC) issued Fort Detrick a “cease and desist order” to halt the research there because it did not have “sufficient systems in place to decontaminate wastewater.” In the statement, the CDC cited “national security reasons” as the rationale for not releasing information about its decision. It was reopened in December 2019.[9] 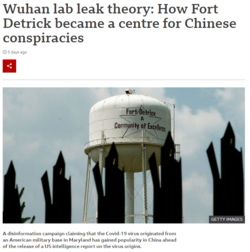 The BBC, in an article from 23 August 2021. All Chinese disinformation.

This page imported content from Wikipedia on 15 March 2020.
Wikipedia is not affiliated with Wikispooks.   Original page source here
Retrieved from "https://wikispooks.com/w/index.php?title=Fort_Detrick&oldid=222166"
Categories: