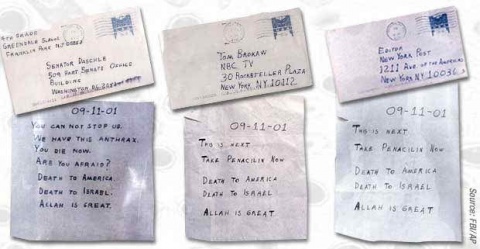 Gloria Irish was a real estate agent in Boca Raton, Florida. She was also the wife of Michael Irish, an editor for the Sun newspaper (now the Tampa Bay Times) in Boca Raton. Some time before the 9/11 attacks, Gloria showed houses to two of its alleged perpetrators, Marwan al-Shehhi and Hamza al-Ghamdi[8]. On 5 October 2001, Robert Stevens, a journalist who worked for the same newspaper as Gloria's husband, died as a result of pulmonary anthrax. His murder would be the first death attributed to the Amerithrax attacks.

As "a precaution", according to the Washington Post, Cipro was administered to Dick Cheney and his close staff on the evening of 9/11 as the Vice President was secreted off to an undisclosed location, days before the first anthrax letters were mailed.[10], on the advice of Jerome Hauer. Bush's reactions to the anthrax mailings were, at best, slow and he took every opportunity to invoke "Osama Bin Laden" in the rhetoric he employed in his public utterances about them. [11]

The FBI accused Fort Detrick scientist, Dr. Steven J. Hatfill, of carrying out the attacks and pursued him for years[When?]. In 2008, the US Justice Department agreed to pay him $4.6 million to settle his lawsuit.[12] In 2014, after "a decade of lawsuits" he cleared his name.[13]

Bruce Ivins was a microbiologist, vaccine and bioweapons researcher at the United States Army Medical Research Institute of Infectious Diseases (USAMRIID) in Fort Detrick, Maryland. He allegedly committed suicide by taking a drug overdose on July 29, 2008. On August 6, 2008, he was officially declared the "lone nut" behind the Amerithrax Attacks, 8 days after his alleged suicide. On February 19, 2010, the FBI formally closed its investigation. No direct evidence implicating Ivins was presented and some documents relating to the investigation remain under seal. [14]

On 2011-07-15, the Justice Department lawyers acknowledged in court papers that the sealed area in Ivins' lab — the so-called hot suite — did not contain the equipment needed to turn liquid anthrax into the refined powder that floated through congressional buildings and post offices in the fall of 2001. These statements were retracted 8 days later.[16]

On 2011-11-29, an 8 year legal battle was finished which exposed slack rules and poor record keeping at the Army’s biodefense laboratory at Fort Detrick, the federal government agreed to pay $2.5 million to the family of Robert Stevens, the first person killed in the anthrax letter attacks of 2001, settling a lawsuit claiming that the Army did not adequately secure its supply of the deadly pathogen. As part of the agreement, Justice Department lawyers are seeking to have many documents that were uncovered in the litigation kept under court seal or destroyed.[12]

In 2015, Richard Lambert, the FBI veteran in charge of the case filed a suit against the FBI, claiming that they were concealing evidence that could have cleared Bruce Ivins.[17]

A secret program entitled the Mail Isolation Control and Tracking Program was instituted in the wake of the 2001 Anthrax Attacks. This was hidden from the public for 12 years until cited by the FBI in its investigation of April 2013 ricin letters. Under the program, the US Postal Service computers photograph the exterior of every piece of paper mail that is processed in the United States — about 160 billion pieces in 2012. These images are kept indefinitely so that mail correspondence can be retroactively tracked at the request of law enforcement.

BioONE, a company founded by Rudy Giuliani,[18] cleaned up some of the sites affected by the Amerithrax attacks.[19]

30 November 2018 Robin  A good overview of this event which although at time was attributed to Al Qaeda, was later admitted to have been a false flag.
A thought provoking introduction to the 2001 Anthrax mailings, which were used to cow opposition to the PATRIOT Act, including the remarkable fact that the FBI's case lead has sued the agency, alleging malpractice!