Abu Bakr al-Baghdadi (aka Abu Du'a), born near the city of Samarra in Iraq, was leader of the Islamic State of Iraq and the Levant (ISIL), which was designated as a terrorist organisation by the United Nations, as well as by the European Union and many individual states.

On 4 October 2011, the US State Department listed Abu Du'a as a "Specially Designated Global Terrorist" and announced a reward of up to US$10 million for information leading to his capture or death.[2] 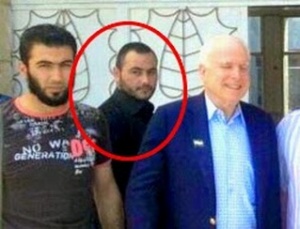 The New York Times has denied the identity of the man pictured with John McCain, stating that "The [false] rumours are based partly on images of a Syrian fighter who resembles Baghdadi, seen in photographs with McCain". However, as Global Research points out, it "freely admits that McCain met with the Free Syrian Army, itself a terrorist organisation responsible for indiscriminate killings, imposition of sharia law, murders, rapes, cannibalism and more."[4]

In 2014, it was reported that Edward Snowden had claimed Abu Bakr al-Baghdadi is a Jewish actor whose real name is Simon Elliot (Elliot Shimon) who, was recruited by Mossad and trained in espionage and psychological warfare.[5]

The origin of these reports seems to be a Facebook post from 29 July 2014,[6] which attributes the claim to leaks from Edward Snowden, but does not provide a source.[7]

Snowden’s lawyer, Ben Wizner, has called the story a hoax, while Glenn Greenwald said it was "utter BS".[8]

On 20 June 2017, Russian Deputy Foreign Minister Gennady Gatilov said he was unable to confirm an announcement by the Russian Army that it may have killed al-Baghdadi on 28 May 2017 during an airstrike on the outskirts of Islamic State's de facto capital Raqqa in Syria.[9]

But the Russian Defence Ministry raised "legitimate questions and doubts" about the US operation, pointing out that it recorded no US coalition airstrikes in the Idlib area in northwest Syria on Saturday when the raid was held. It also rejected Trump’s claims that Russian forces opened up the airspace under its control in Syria to American planes to facilitate the operation against the IS leader. The Ministry questioned the very possibility of al-Baghdadi’s presence in Idlib as the area is held by Al-Qaeda offshoot, Jabhat al-Nusra, who have always been mortal enemies of Islamic State.[11]

"Something big has happened"

The Dissembler-in-Chief took to Twitter this past weekend to let the world know that "Something very big has just happened!"

We now know that that something was a daring special forces raid that ended in the death of Osama bin Laden! . . . Or is that Abu Musab al-Zarqawi? Or maybe Abu Omar al-Baghdadi? No, no, it was Abu Bakr al-Baghdadi! Honest! We took DNA evidence before we threw him in the sea!

Find out about the unlikely story of Baghdadi's umpteenth death in this timely edition of The Corbett Report podcast.[12]