Alistair Crooke is a former MI6 agent and founder of Conflicts Forum.

The Times reports that "Born in Ireland in 1949, Crooke was brought up in Africa, mainly on a farm near Harare in what was then Rhodesia, where his father farmed tobacco. He was educated in Switzerland and at St Andrews University"[1], where he attended from 1968 to 1972 after which he was given an MA in Politics and Economics.

Crooke has been described as an 'expert in "parallel diplomacy", the use of covert talks when normal channels have broken down', a field which is something of an MI6 specialty. [2] His Conflicts Forum biography states that he has 'direct experience of conflict over a period of 30 years in Ireland, South Africa, Namibia, Afghanistan, Cambodia and Colombia.' [3]

His posting to Ireland in 1975 led to his first role as a British negotiator — with the IRA. Three years later he moved to South Africa where as “first secretary and press officer” he joined mediation with Swapo rebels in Namibia.

It was during the Soviet occupation of Afghanistan, when he was stationed for three years in neighbouring Pakistan, that Crooke first met militant Islamists. The mid-1980s were a wild time on the Afghan frontier, with American money and weapons pouring in to support those fighting the Soviet army. [4]

From 1997 to 2003, Crooke was seconded to work for the European Union in Palestine.

He played a role in the negotiations to end the Siege of the Church of the Nativity in 2002 and helped facilitate the Palestinian cease-fires of 2002 and 2003. He also was a staff member of the Mitchell Committee that enquired into the causes of the Intifada. [5]

In 2002, Crooke put together a plan for a Hamas ceasefire which was wrecked by an Israeli airstrike that killed the organisation's military commander and 14 civilians. He was withdrawn from the region a year later.

The embassy acknowledged that Mr Crooke was leaving against his will but declined to discuss what his associates say were his growing differences with the Foreign Office over how best to bring an end to violence by Hamas and other militant groups.

Sources said that even after the latest suicide bombings and collapse of a seven-week ceasefire, amid what the Palestinians claim was deliberate Israeli provocation, Mr Crooke continued to argue that Hamas was ready to enter the political process and urged Israeli restraint. [6]

In 2004, Crooke founded Conflicts Forum in order to conduct talks with Hamas, Hezbollah, the Muslim Brotherhood and the Jamiat-i-Islami.

It is backed by former government, military and intelligence officials in Europe and the United States who reject many of the methods of the “war on terror”.

It is funded from private donations but has the tacit support of some Arab governments.[7]

In November 2004, the Intelligence and Terrorism Information Center at Israel's Center for Special Studies released an alleged transcript of a November 2002 series of meetings involving Crooke, one with members of Fatah Tanzim and the other with a Hamas delegation including Sheikh Ahmed Yassin. [8]

Crooke has claimed that the transcript's account of his conversation with Yassin is inaccurate.

In an interview, he said he stressed to Yasin, "There were some actions that were unacceptable to anyone in Europe and America. Nobody believed that blowing up children eating pizzas, that these children were responsible for the plight of Palestinians." But he added that he drew a distinction between "terrorism" and "resistance," offering that his family had been involved in fighting the Nazi occupation in France in World War II. [9]

"Alastair Crooke once stated - that the CIA established the basis of a “jihadi Wal-Mart” of sorts - to which ISIS had immediate and easy access. Crooke noted that the weapons program was set up with "plausible deniability" in mind, which would allow its American intelligence sponsors to be shielded from any potential future legal prosecution or public embarrassment. Crooke noted in a 2015 BBC interview that, “The West does not actually hand the weapons to al-Qaida, let alone to ISIS..., but the system they’ve constructed leads precisely to that end.”"[10]

Crooke's advocacy of dialogue with Islamists has been heavily criticised by neoconservatives. An April 2005 article in FrontPage Magazine by P. David Hornik cited the Yassin transcript as being 'all too indicative of which side Europe is really on.'[11] Melanie Phillips picked up the Horvik article a few days later in a blog post which asked 'who exactly is currently responsible for the potentially lethal activities of the ‘former’ British MI6 officer Alistair Crooke?' [12]

In an August 2005 blog post, Phillips accused Crooke of 'appeasement of genocidal terror.' [13] In January 2006, the Yassin transcript was cited by the Transatlantic Institute of the American Jewish Committee in a critique of the European Union's contacts with Hamas. [14] In the July 2006 issue of Prospect magazine, Dean Godson of Policy Exchange charged that 'Alastair Crooke's indulgence of Hamas is a product of late-imperial British defeatism.' [15]

In a November 2007 pamphlet, Misunderstanding Ulster, David Trimble accused a similar list of people of misinterpreting the significance of the Irish peace process for the Middle East. He cited Crooke and Sieghart, adding Gabrielle Rifkind of Oxford Research Group, Michael Ancram and Daniel Levy. Dean Godson is credited as the 'driving force' behind the pamphlet, written under the auspices of the Conservative Friends of Israel. [17] 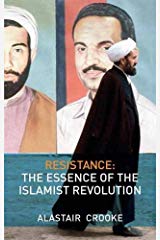