The Times is the oldest daily newspaper in continuous publication.

The Times reports that it is widely regarded as the world's newspaper of record, and that it has offered readers in-depth, award-winning and objective coverage of global events since 1785.[1][2]

Criticism of the Working Group on Syria Propaganda and Media

On the morning US and UK forces were bombing in Syria, The Times criticised the Working Group on Syria Propaganda and Media on their cover page.

Reporters for The Times include the Integrity Initiative connected journalist (who denied the fact) David Aaronovitch who is quoted in the 2011 BBC piece Bilderberg mystery: Why do people believe in cabals?.[3][4] 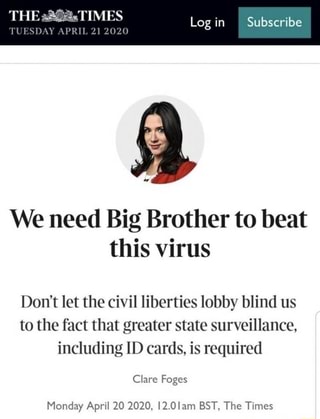 Clare Foges wrote in April 2020 that We need big brother to beat this virus.

A document sourced from The Times