The Boston Marathon bombings were a pair of bombs in Boston on 15th of April 2013, reported to have killed 3 people and injured 280. The official narrative blames a pair of "lone nuts", Dzhokhar Tsarnaev and his brother Tamerlan Tsarnaev who have demonstrable links to the American "national security" apparatus, which officials have not been open about.[1][2] The FBI's subsequent investigative and process led James Henry of Who What Why to suggest that they seem "to be employing a scorched earth strategy of destroying anything that might be of use to the “enemy.”"[3]

Outside Marathon Sports at 671–673 Boylston Street at 2:49:43 pm EDT, a bomb exploded, followed about 12 seconds later by another bomb, one block farther (~200m) west at 755 Boylston Street, killing 3 people and injuring an estimated 264 others. The Federal Bureau of Investigation took over the investigation, and on April 18, released photographs and a surveillance video of two suspects. The suspects were identified later that day as Chechen brothers Dzhokhar and Tamerlan Tsarnaev.

Shortly after the release of the images, the suspects killed a police officer and carjacked the car of a young Chinese man who was identified only as "Danny".[4]

A former Vice Chairman of the National Intelligence Council, previously implicated by Sibel Edmonds[5] has admitted that his daughter was previously married to an uncle of the suspects, and that they "lived in our house in [Maryland] for a year or so", but he insists that this is merely a coincidence.[6] 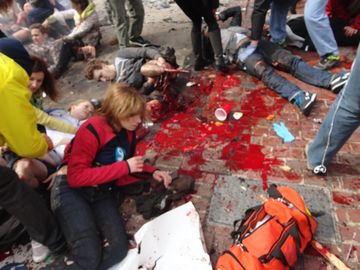 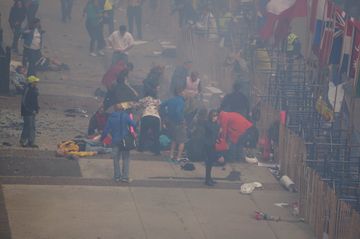 Carlos Arredondo adjusting his hat and holding the US flag, later displayed blood-soaked by commercially-controlled media.

According to Wikipedia, the first bomb exploded at 2:49:43 p.m. - at that time, the race clock near the finish line showed 04:09:43, the second bomb exploded 12 seconds thereafter. A FEMA assessment[7] of the event explains, how many volunteers and medical staff were available for treatment, what equipment was at the ready and that exercise scenarios played beforehand simulated the explosion of IEDs. Yet, it is a person by the name of Carlos Arredondo who will bring Jeff Bauman to a medical tent in a wheelchair, which is in itself a potential fatal mistake for the rescue[8] of a person that suffers life threatening blood loss from wounds to both legs, but also after Bauman has been lying on the ground for a period of more than five minutes, which can be proven by the race clock which is visible in the Aaron Tang photo set and by other video evidence (see the documentary the Boston Unbombing further below).

As part of the manhunt for Dzhokhar Tsarnaev, an unprecedented "city lockdown" was ordered on April 19, with thousands of law enforcement officers searching a 20-block area of Watertown. Residents of Watertown and surrounding areas, including Boston, were told to stay indoors. The public transportation system and most businesses and public institutions were shut down, creating a deserted urban environment of historic size and duration. No legal justification was presented for this conduct.

Similar to the 2017 Las Vegas shooting, an anonymous individual made predictions on 4chan as to what would follow on the political side from the event.[9] At the time a larger effort was underway on the message-board to identify the culprits from publicly available photographs.[10] The relevant part of his text reads as follows: "WARNING: Laws being written to screw you - I work on a security commission and I've just received word to start campaigning on a campaign we've been working on for the last two months and now it all makes sense. I'll keep it as short can I can. They're going to pin this event on a male late teens to early 20s and say he did it because he's unstable. They are going to find firearms and a NRA book in his home. They are going to say he used reloading powder for the explosions and that reloading powder shouldn't be for sale to the public. They are then going to say that because the powder in ammunition can be used for explosions that the number of rounds you can buy should be limited and taxed to help pay for these events. I can't do anything or I'll lose my job and possibly face criminal charges. Please don't let them get away with it. They won't find the suspect till later this week and the raid is issued to occur on Friday. This was a staged event. The people hurt are real but the event was planned. Don't let them hurt our rights."[11]

In the first six months after the Boston Marathon bombing, the FBI actively pursued several people connected, sometimes only tangentially, with the alleged bombers. This has included intimidation, arrest, deportation, closing of bank accounts and the fatal shooting of Ibragim Todashev. This has led to allegations that it is a specific policy designed to hamper the defense team of Dzhokhar Tsarnaev, with WhoWhatWhy even terming it a "war on witnesses".[12][13][14][15]

The Bureau of Alcohol, Tobacco and Firearms (ATF) confirmed that 30 specially trained forensic scientists were working around the clock on the two blast sites, stating that "no piece of evidence will be too small to ignore. They will have combed every square inch of Boylston Street, including up on top of the roofs, bagging any fragment of the bomb they can find for analysis at the FBI’s bomb laboratory in Quantico."[16]

Tom Thurman, an explosives expert at Eastern Kentucky University, told The Independent that FBI investigators would employ similar techniques to those used by the Metropolitan Police to investigate the 7 July 2005 London bombings:

“It’s a huge undertaking but they’ll do what you guys did following the subway bombings in London. You have to use everything you have to put it all together.”[17]

A July 2014 poll conducted by Dzhokhar Tsarnaev’s legal defense team, part of an unsuccessful effort to force a change of venue for his trial, found that 58% of Bostonians believed the accused Marathon bomber is "definitely guilty" while 42% were "unsure".[18]

The FBI agents Chris Lorek and Stephen Shaw[19] who died shortly after the event,[20][21] were not, according to a spokesperson of the FBI,[22] involved with the arrest of the Tsarnev brothers or even in Watertown as the shootout happened.

Lawyers for Dzhokhar Tsarnaev rested their case on Tuesday after calling only 4 witnesses during a 5 hour testimony. The defense case followed a 15 day prosecution case involving 92 witnesses.[23] The jury returned a guilty verdict after 11 hours of deliberation.[24] Some significant doubts have been raised about the evidence given by the prosecution.[25]