The Metropolitan Police Service (MPS) is a UK police force. It has jurisdiction over all of London except the "square mile", where an entirely separate and legally anomalous force, the City of London Police‎ has jurisdiction.

On 22 July 2005, the SO19 Firearms Unit of the Met shot Jean Charles de Menezes dead by 8 hollow point bullets.[1][2] Initially, the UK commercially-controlled media put out a misleading story, claiming that he had vaulted ticket barriers and had been told to stop by police. Lana Vandenberghe, an administration secretary for the Independent Police Complaints Commission, noticed that the story was contradicted by documents she had in front of her, so she decided to leak them to the commercially-controlled media. She was sacked from the IPCC.[3] No one was prosecuted as a result of his killing.[1]

The Met's Counter Terrorism Command published a statement following the release of video which apparently shows a British-accented ISIS jihadi decapitating kidnapped journalist James Foley in 2014. It read: "We would like to remind the public that viewing, downloading or disseminating extremist material within the UK may constitute an offence under Terrorism legislation." When challenged about this, a spokesman clarified that "Viewing the video could be taken into consideration if any other information comes to light", but on its own would not be prosecuted.[4] 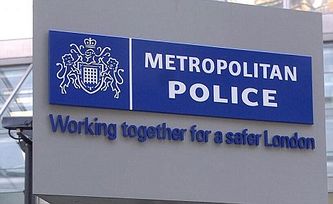 The Metropolitan Police is actively researching mass surveillance technologies, including facial recognition. In November 2017 it was criticised by Paul Wiles, the UK government's Biometrics watchdog, for carrying out these trials in secret, without promising to publish results.[5]

The Metropolitan Police Service has responsibility for the protection of the diplomatic community in London, under the provisions of the Vienna Convention on Diplomatic Relations 1961. In November 1974, the Diplomatic Protection Group (DPG) was formed with the sole task of ensuring the security and protection of the diplomatic missions in Central London, to the exclusion of ordinary police duties. Initially the group was staffed by volunteers and nominated officers performing a six-month attachment. In 1979 the DPG became a permanent Command in the Met Police, with protection now being provided by permanent officers.

Since its creation the Diplomatic Protection Group has been involved in a number of significant events. One of the most famous is the 1980 Iranian Embassy Siege. Constable Trevor Lock was on duty when along with embassy staff he was taken hostage by terrorists. He was eventually freed by the British Army's Special Air Service who stormed the embassy six days later.

The role of the DPG has developed since its formation, with officers now involved with the protection of certain Government sites in addition to providing personal protection when required. Officers are regularly deployed to support major events such as State Visits and the Queen's Birthday Parade.[6]

In 2016 the Metropolitan Police announced plans to spend over £2m to "actively investigate “offensive” comments on Twitter and Facebook" which will have five full-time detectives on its staff. The Register commented that "it's far easier to meet crime detection targets from the comfort of your desk than to get out on the street and confront real criminals."[7]