The 2017 Las Vegas shooting claimed the lives of over 50 people, making it the deadliest mass shooting committed by an individual in the United States. It has been reported that the shooting lasted 10 minutes [1]and that more than 1000 shoots were fired.[2]

Millionaire gambler and businessman Stephen Paddock took a number of guns up to his room on the 32nd floor of the Mandalay Bay resort, Las Vegas. He then began shooting onto the crowd of concertgoers below, killing 58 people and injuring hundreds, making this mass shooting the deadliest ever committed by an individual in the United States. About an hour after firing his last shot into the crowd, the FBI stormed his room where they found Paddock had shot himself dead. Even months later, the authorities have no explanation for why Paddock started shooting, or why he stopped.[3]

After the Associated Press sued for court documents and autopsy reports, it emerged in January 2018 that authorities had a second 'person of interest', whose name was reportedly intended to be redacted, but whom the Las Vegas Review-Journal named as Douglas Haig after they obtained an unredacted copy.[4] In October 2018, his trial was set for 2019.[5]

Some videos on YouTube appear to show gunshots coming from positions other than the 23rd floor, particularly the 4th floor.[6][7] On October 2, 2017 Mike Adams of Natural News claimed that the official narrative was ludicrous and that his forensic acoustic analysis indicates that there were two shooters.[8] This is corroborated by the account of Kymberley Suchomel, as well as a number of 911 calls to the Las Vegas Metropolitan Police Department (LVMPD).[9][10] Shepard Ambellas of Intellihub reported that he tracked unusual flight patterns of airplanes with the help of Flightradar24 which moved like helicopters, hovering over buildings in the direct vicinity at the time of the event, making possible the extraction of operators, as well as being another spot from which was fired.[11] Video footage that supports this theory does exist[12][13][14] and there is at least one recorded 911 call to the LVMPD that informs the officer about the shooter being airborne: “I think we saw the guy flying in a helicopter. […] You guys need officers in the sky because he’s flying in a helicopter.”.[15] Infowars reported that phones and laptops from eyewitnesses were deleted by the FBI.[16]

Corporate media has assumed a fairly uncritical role, echoing the government's narrative[17]. Coverage of the attack was much less than other such shootings[citation needed] and allegations about Harvey Weinstein quickly dominated reporting[When?]. ABC news reported on 25 October that a "laptop computer recovered from the Las Vegas hotel room where Stephen Paddock launched the deadliest mass shooting in U.S. history was missing its hard drive".[18]

In a move reminiscent of their response to 9-11, all CCTV of the attack was seized by the FBI and withheld from the public[24] until months later some selected footage, body camera and 911 audio has been made public.[25][26][27]

The incident was followed by increased debate about US Gun law, with attention focused on bump fire stocks, which Paddock reportedly used to allow his semi-automatic rifles to fire at a rate similar to that of a fully automatic weapon.[28] On 3rd November, the state of Massachusetts banned bumpstocks.[29]In January 2018, the attack was being used to teach 6th graders about gun law.[30]

YouTube has been removing videos that challenge the US government's story of the attack.[24] A video from the Ballagio Hotel suggests that some hotel guests and staff there disagree that the corporate media reports of a single shooter were incorrect.[31]

Predictions in connection with the event

In a way similar to the Boston Marathon bombing, someone made predictions on 4chan before the event about what would take place and what the political consequences would be. His five messages read as follows: "(1) look i feel bad for some of you on this website. so i'll let you in on a little secret. if you live in las vegas or henderson stay inside tomorrow. don't go anywhere where there are large groups of people. also if you see three blacks vans parked next to each other immediately leave the area. you're welcome - (2) just stay away. go to arizona if you can. they won't bother you in arizona. - (3) to clarify i won't be doing anything to harm anyone. i'm not a killer and i never will be one. - (4) it's called the "high incident project". they want to make the american public think that places with extremely high security aren't safe. they are trying to create more regulations. you will see laws proposed within the next few years to put up more metal detectors and other security devices. media and politicians will be saying places with lots of police need even more police. i can't guarantee anything will happen tomorrow but las vegas is on their minds. - (5) if their plan is successful state of nevada will pass a law in the future making all casinos have mandatory metal detectors and backscatter machines. soon after a federal law will be passed to put these machines in universities, high schools, federal buildings, you name it. osi systems and chertoff are the main producers of these machines. sometime around 2020 chertoff and osi will merge into a single company. after they merge the owners will sell off all their stock and make billions in profit. mr chertoff has been in contact with sheldon adelson. mr adelson will become a huge sponsor of these machines and he will be the first to put them in his casinos when the law passes. this is my last message for now. don't expect me to return anytime soon"[32] 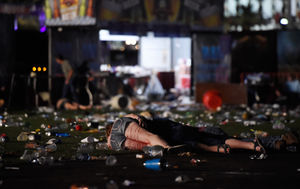