From Wikispooks
(Redirected from Burma)
Jump to navigation Jump to search

Myanmar is a nation state in South East Asia. 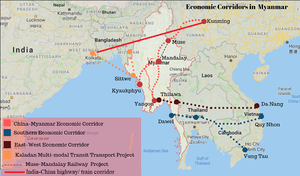 The country is situated in a highly strategic location. It is the most realistic route for land transport between the two great Asian powers India and China, and between the rest of South East Asia and India /China. The country is the shortest route between the southern Chinese inland provinces and the Indian Ocean, for both goods import /exports and oil and gas imports. The US strategic planners fear China might circumvent a naval embargo in the Pacific by using Myanmarese ports, and even that China might use these ports as naval bases.

In addition, the country possess an immense wealth of natural resources, including large amounts of minerals, oil and gas, tropical timber and agricultural potential.

After the 2021 Myanmar Coup, the army seized the assets of George Soros' Open Society Foundations and abducted and jailed their staff members, blaming OSF for - among other things - helping the opposition during the coup.[1][2]

A citizen of Myanmar on Wikispooks