The 1970s was an important decade in the development of the international deep state. Since the CIA had attracted the attention of the US congress, a decision was made to offshore its operations to other groups, principally intelligence agencies. Transnational deep state milieux grew in importance. Le Cercle developed from its European catholic origins to be a more secular, transatlantic group.

As domestic opposition continued to grow in the USA, this US finally left Vietnam, in 1975. It had been a cash cow for the small cabal who had operated it, and provided the CIA with great experience at covert operations which they applied later around the world, specially in South America. 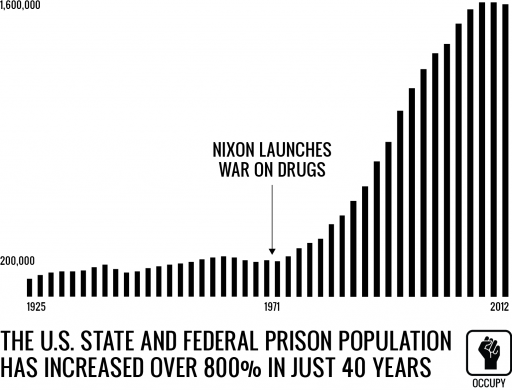 In 1971 Richard Nixon declared drugs to be public enemy #1. In fact this was a political ploy, designed to facilitate his reelection by giving him a pretext to disrupt the Negro and anti-war communities. Even after his domestic policy advisor, John Ehrlichman admitted the fraud (in 1994[1]) the "war" was not discontinued. Instead it acts as a motor for the US incarceration and pharmaceutical industries. Most importantly, it is a key element of the supranational deep state's illegal drug trade, explaining why it continues to this day.

At the 1973 Bilderberg meeting, top US oil executives and bankers met to work out how to profit more the oil. The cooked up a plan to increase the price 400%, after starting a war in the Middle East. This went more or less according to plan, and the commercially-controlled media enforced the official narrative that the increased prices for a response to unexpected ("shock") events, rather than a deliberate policy goal.

Evolution of the Supranational Deep State

The 1970s was a very significant decade of development for deep state groups, and saw a rise in the importance of transnational character of deep state milieux. The US deep state outgrew the CIA, using contacts from groups such as the Safari Club and Le Cercle - which moved away from its European catholic roots.[2]

Offshoring by the Cabal

Increasing concern about the activities of the CIA lead to the development of a new strategy for the cabal. George H. W. Bush was deceitfully brought in as a CIA outside to reorganise the CIA. In fact, he was aiming to stop the leaks about its operations. A lot of agents were sacked, only to continue to work in a less official, more deniable, capacity. From 1977-1981, Edwin Wilson's Arms for Libya deal saw about 20 tonnes of plastic explosive sold to Libya, while he arranged to train Muammar Gaddafi's troops in bomb making. When he was caught, the CIA hung him out to dry by denying all knowledge.

After the political changes in France and Germany in 1969, the 1970s saw Le Cercle expand its reach and become a transatlantic organisation. It evolved into "a confidential forum for influential personalities and the policy advisors of the heads of state to hold off the record discussions of current affairs and the desired action to be taken." Its anti-communist nature remained, but the original Catholic Christian character was replaced by secularism.[2]

Interference with The Democratic Process

NATO's Operation Gladio carried out several false flag attacks in Western Europe, especially Italy, including the kidnapping and murder of Aldo Moro. They were successful in preventing the electoral success of the communist party, although the plan was eventually exposed in the late 1980s.

The deep state carried out a lot of coups in the 1970s all around the world to try to prevent 'left wing' governments and policies. In the "developed" countries, these were not usually military in nature, but proceeded in a variety of more underhanded fashions. In 1975, the CIA carried out a coup in Australia which is little known to this day. Operating in complete secrecy, collaboration by members of Le Cercle was effective in carrying out several changes of government.

“[M]uch of the destabilization of British democracy in the 1970s can only be fully understood by analysing the international support given to groups like the Anglo-American “deniable propaganda” outlet, the Institute for the Study of Conflict.”
David Teacher [3]

The best documented subversion may be the 1979 election of Margaret Thatcher in UK, whose government was to aggressively privatise nationally run organisations (such as British Rail, British Gas, British Telecom etc. in the 1980s). Brian Crozier admitted in 1993 that his Shield Committee was active in getting Thatcher elected.

In 1979, Benjamin Netanyahu organised the JCIT. This conference was attended by a lot of senior spooks and deep politicians as well as academics. It facilitated the joint establishment of the ideology later sold to the public as the "War on Terror". This was designed to insured the deep state and its permanent war economy against outbreaks of peace by planning alternate enemies, i.e. "terrorism", which was not to be looked upon by the traditional analysis, and which would be crested by false flag attacks if needed. The follow up conference was 5 years later in Washington DC.