Civil liberties are rights and freedoms enjoyed by citizens. They have been dramatically reduced since 2001, under the dogma of the "war on terror".

These have admittedly been rolled back since 9-11,[1] but will be restored when the perpetual "War on Terror" is safely concluded. Honest.

The roll back in civil liberties is part of a globally coordinated lurch toward totalitarian government. These are habituating populations to increased mass surveillance and stripping them of even the nominal rights to be free from arbitrary search, kidnapping, detention and even torture and assassination.

The main doctrine pretext under which governments are rolling back civil liberties is the so-called "War on Terror". They claim that this is a justified and even needed response to the increased threat of global "terrorism". However, prior to 1979, no such response was considered. Moreover, this policy has failed to reduce "terrorism", but according to US state department, have seen the number of terrorist attacks has increased by around 6500%.[2] At the same time, various corporations have reaped huge profits from the policy. 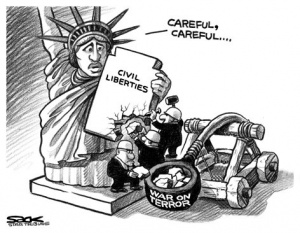