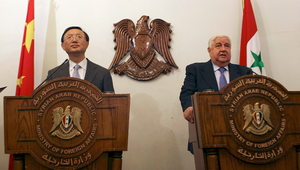 The New Silk Road Will Go Through Syria

Amid the proverbial doom and gloom pervading all things Syria, the slings and arrows of outrageous fortune sometimes yield, well, good fortune.

Take what happened this past Sunday in Beijing. The China-Arab Exchange Association and the Syrian Embassy organised a Syria Day Expo crammed with hundreds of Chinese specialists in infrastructure investment.[1] It was a sort of mini-gathering of the Asia Infrastructure Investment Bank (AIIB), billed as “The First Project Matchmaking Fair for Syria Reconstruction”.

And there will be serious follow-ups: a Syria Reconstruction Expo; the 59th Damascus International Fair next month, where around 30 Arab and foreign nations will be represented; and the China-Arab States Expo in Yinchuan, Ningxia Hui province, in September.

Qin Yong, deputy chairman of the China-Arab Exchange Association, announced that Beijing plans to invest $2 billion in an industrial park in Syria for 150 Chinese companies.[2]

Nothing would make more sense. Before the tragic Syrian proxy war, Syrian merchants were already incredibly active in the small-goods Silk Road between Yiwu and the Levant. The Chinese don’t forget that Syria controlled overland access to both Europe and Africa in ancient Silk Road times when, after the desert crossing via Palmyra, goods reached the Mediterranean on their way to Rome. After the demise of Palmyra, a secondary road followed the Euphrates upstream and then through Aleppo and Antioch.

Beijing always plans years ahead. And the government in Damascus is implicated at the highest levels. So, it’s not an accident that Syrian Ambassador to China Imad Moustapha had to come up with the clincher: China, Russia and Iran will have priority over anyone else for all infrastructure investment and reconstruction projects when the war is over.

The New Silk Roads – or One Belt, One Road (OBOR) – initiative will inevitably feature a Syrian hub – complete with the requisite legal support for Chinese companies involved in investment, construction and banking via a special commission created by the Syrian embassy, the China-Arab Exchange Association and the Beijing-based Shijing law firm.

Get me on that Shanghai-Latakia cargo

Few remember that before the war China had already invested tens of billions of US dollars in Syria’s oil and gas industry. Naturally the priority for Damascus, once the war is over, will be massive reconstruction of widely destroyed infrastructure. China could be part of that via the AIIB. Then comes investment in agriculture, industry and connectivity – transportation corridors in the Levant and connecting Syria to Iraq and Iran (other two OBOR hubs).

What matters most of all is that Beijing has already taken the crucial step of being directly involved in the final settlement of the Syrian war – geopolitically and geo-economically. Beijing has had a special representative for Syria since last year – and has already been providing humanitarian aid. Needless to add, all those elaborate plans depend on no more war. And there’s the rub.

With the demise of Daesh (ISIS), or at least its imminent loss of any significant urban centre, no one knows in what manner a fragmented, phony Caliphate “Sunnistan” might be manipulated into cutting Syria from its New Silk Road future.

Qatar has already provided a game-changer; Doha has gotten closer to Tehran (common interests in South Pars/North Dome gas-field oblige), as well as Damascus – much to the despair of the House of Saud. So, unlike the recent past, Qatar is not engaged in regime change anymore. But still there are the diverging interests of Saudi Arabia, Turkey, Israel and, of course, Washington, to accommodate.

A possible scenario out of what Putin and Trump negotiated in Hamburg – that was not relayed by either Lavrov or Tillerson – is that the ceasefire in southwestern Syria, assuming it holds, could mean US peacekeeping forces in effect sanctioning the creation of a demilitarised zone (DMZ) between the Syrian Golan and the rest of the country.

Translation: the Golan de facto annexed by Israel. And the “carrot” for Moscow would be Washington accepting Crimea de facto re-incorporated into the Russian Federation.

That may sound less far-fetched than it seems. The next few months will tell if this is indeed a plausible scenario.

The other big sticking point is Ankara against the YPG Kurds. Contrary to the ominous and quite possible Balkanisation scenario, Washington and Moscow might well decide, in tandem, to let them sort things out by themselves.[3] Then we will inevitably have the Turkish army occupying al-Bab for the foreseeable future.

The bottom line: that Saudi Arabia gets nothing. And Israel and Turkey get political/military “wins”. It’s hard to imagine how Moscow could possibly sell this arrangement to Iran as a victory. Still, Tehran may not have a free flow Iran-Iraq-Syria-Hezbollah route totally back in action, but it will maintain close relations with Damascus and be engaged in the expansion of the New Silk Roads.

The key question from now on seems to be whether Washington will follow the deep state “Syraq” policy – as in “Assad must go” mixed with support or weaponising of non-existent “moderate rebels”; or whether Trump’s priority – to eliminate Daesh/ISIS for good – will prevail.

Beijing, anyway, has made up its mind. It will work non-stop for the Iran-Iraq-Syria triumvirate to become a key hub in OBOR. Any bets against a future, booming Shanghai-Latakia container route?