Eric S. Edelman has had a number of roles in his career as a US Foreign Service Officer, since entered the Senior Foreign Service in 1992. He was named as a corrupt individual of interest by Sibel Edmonds.[1]

Edelman was born in Baltimore and raised in New York.[2] He received a B.A. in History and Government from Cornell University in 1972, and a Ph.D. in U.S. Diplomatic History from Yale University in 1981. [3]

Edelman was appointed to the position of Undersecretary of Defense for Policy on August 9, 2005, by recess appointment by George W. Bush, after his nomination was stalled in the Senate. "Democrats on the Senate Armed Services Committee led by Carl Levin of Michigan, their ranking member, stalled Edelman's nomination to force the release of documents related to a Office of Special Plans that Feith set up before the conflict." [4] Edelman replaced Douglas Feith, who had resigned. The appointment, set to expire in January 2007 when a new Congress convened, [5] was confirmed by the Senate on 9 February, 2006. [6] [7] Edelman served as Turkish Ambassador after the second Iraq invasion, during which anti-American tensions within Turkey were high. According to Ibrahim Karagul, a columninst with the Turkish Weekly, "Edelman act(ed) more like a colonial governor than an ambassador... (He) is probably the least-liked and trusted American ambassador in Turkish history, and his reputation is not likely to recuperate." [8]

Edelman was Vice President Dick Cheney's deputy national security officer from Feb. 2001 to June 2003 and ambassador to Finland for three years prior to that, according to the State Department. Edelman was an aide to Cheney when Cheney was secretary of defense under President George H. W. Bush. 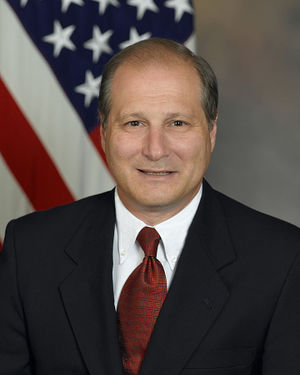 +
Has image2
File:Eric Edelman.jpg +
Has noRatings
0 +
Has objectClass
Person +
Has objectClass2
Person +
Has posting
US/Ambassador to Turkey +, US/Ambassador to Finland +  and US/Under Secretary of Defense for Policy +
Has powerbase
http://www.powerbase.info/index.php/Eric Edelman +
Has revisionSize
5,519 +
Has revisionUser
MaintenanceBot +
Has sourcewatch
http://www.sourcewatch.org/index.php/Eric Edelman +
Has spouse
Patricia D. Edelman +
Has website
https://web.archive.org/web/20080306060929/http://www.defenselink.mil/bios/biographydetail.aspx?biographyid=45 +
Has wikipediaPage
https://en.wikipedia.org/wiki/Eric S. Edelman +
Has wikipediaPage2
https://en.wikipedia.org/wiki/Eric_S._Edelman +
Is not stub
true +
Has subobject"Has subobject" is a predefined property representing a container construct and is provided by Semantic MediaWiki.
Eric Edelman +, Eric Edelman +  and Eric Edelman +