The group was set up in Summer 2017, very possibly around the closed door Answering Russia's Strategic Narratives meeting.[1] 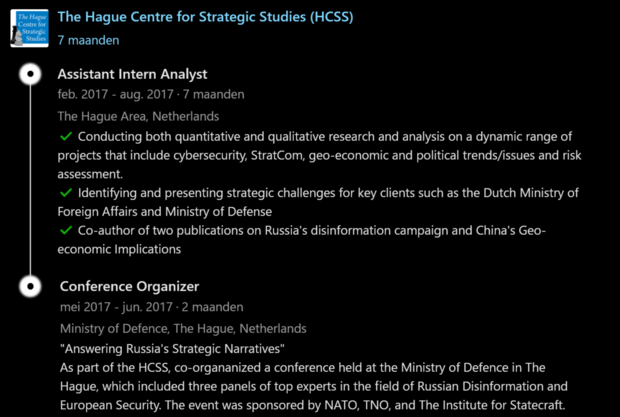 Katharine Klačanský's Linkedin page on 2 January 2021, which names her as organiser of Answering Russia's Strategic Narratives

Answering Russia's Strategic Narratives was a one day event on 22 June 2017 organised by The Hague Centre for Strategic Studies, which described it as a "conference", although it was by invitation only. Reports from the HCSS from after the meeting revealed Stopfake and the East StratCom Task Force granted their database (of files on media sources, individuals and their role in reporting Russian news or interests of Russian media) to the HCSS for an "offensive" to set-up sites and institutes that would "monitor Russian dinformation", seemingly explaining the reason Ida Eklund-Lindwall and Yehchen Fedchenko became part of the Dutch Cluster of the IfS.[2]

Gaby van den Berg was reportedly "Very interested in IFS", according to a document from the Integrity Initiative leak which reported "Maria to follow up: meet-up end of July. Will invite her into Dutch cluster and first cluster meeting in September 2018 (although she lives in London)."[3]

The group was revealed by the first Integrity Initiative Leak.[1]

Several activists and twitter users openly engaged in discussion with Dutch US correspondents and even Sijbren de Jong himself, only to be ignored or become the victim of "whataboutism" about William Barr, Muellergate or other Trump-distractions.[4][5]