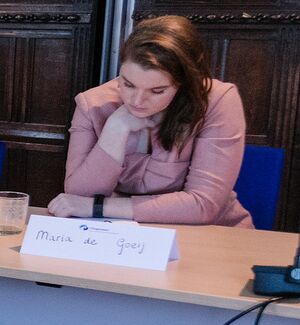 Maria de Goeij is a polyglot member of the Integrity Initiative. She is listed as a leader of some sorts of the Dutch Integrity Initiative Cluster, having started the Dutch Cluster with the help of Sijbren de Jong, Rianne Siebenga and Katharine Klacansky who worked at the The Hague Centre for Strategic Studies (HCSS). She provided trip reports and seemed as the main recruiter for the Dutch Cluster, reporting and giving status updates about the team, including the "internal politics" that caused conflict and made Sijbren de Jong leave the HCSS and join NATO's Shape Division. In March 2020 she started working for the Special Services Division of Thomson Reuters in London consulting and providing IT and cyber security services for multiple governments.

Maria de Goeij attended the NATO 2018 Riga Stratcom Dialogue and submitted a trip report which was leaked in December 2018. Gaby van den Berg was present and was "very interested in joining the IfS. The Head of Section Cultural Affairs & Information of the Dutch Army Robert Gooren also aided De Goeij in achieving more contacts for her cluster. De Goeij seemed to try to recruit members of the Dutch Ministry of Defence that were setting up their own cyber warfare departments or close consultants.[3] During her time as member of the IfS she appears to have employed a lot of people that were all from Leiden University, hinting the university simultaneously has some other purposes. De Goeij remarked in the trip report her specific preference for Leiden Uni-alumni as leaders of the Dutch cluster. 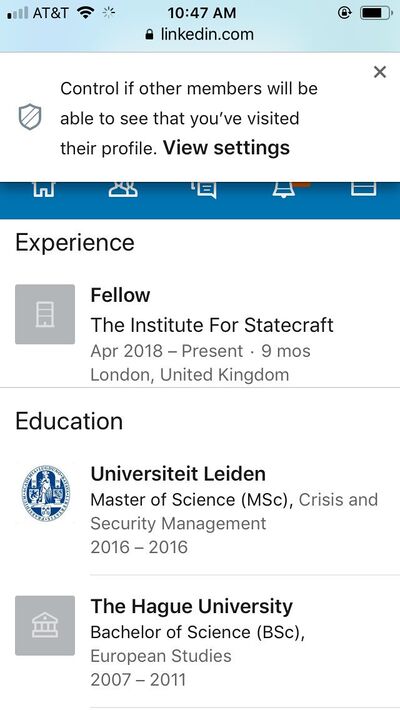 Deleted parts of De Goeij's Linkedin page. Senior Fellow, why would you delete your "charity[4]" work?[5]

After the Integrity Initiative Leak de Goeij attempted to conceal her past and places that would connect her to the Institute for Statecraft, similar to how Rianne Siebenga, Ida Eklund-Lindwall and Sijbren de Jong deleted all mentions of the IfS and the original event where the Dutch cluster was set-up that now only appears in the curriculum vitae of an assistant to De Jong and Siebenga.[6] Interesting to note here are the passages (or just her profile picture) she removed from her LinkedIn page. Even pieces of her resume that aren't aren't linked yet to other members are deleted including her degree from the The Hague University of Applied Sciences and the South African University of the Free State. Apparently the new leader "coordinated the cluster from London"[7], De Goeij's new workplace from April of 2018. If that is correct Rianne Siebenga was the main Dutch member in command in the Netherlands from mid-2018.

The new name of the IfS on Maria de Goeij's Linkedin page appears to be "thinktank".[8] Her new role at a specialized security and IT consultancy division of Thomson-Reuters is interesting as she gives no date of resignation at the "thinktank", leaving questions who she actually works for, what she is doing at Thomson Reuters, possibly in cooperation with Matthijs Veenendaal, a "cyberterrorism" scientist she met during the 2018 Riga Stratcom dialogue in Latvia and possibly also the summer conference where the Dutch Cluster was set-up.

A Document by Maria de Goeij