John Yoo is a lawyer who in 2002 authored a now infamous "torture memo" which lifted legal restrictions on the use of torture in USA.[1]

John Yoo's name has become synonymous with the infamous "torture memo" of August, 2002, which lifted legal restrictions on the use of torture in USA, claiming that the War Crimes Act of the Geneva Convention need not apply to 'enemy combatants'.[1] In 2012 he was found guilty of crimes against humanity by the Kuala Lumpur War Crimes Commission.[2] He was later granted immunity from prosecution in US courts in this regard.[3][4]

Yoo has suggested that since the primary task of the President during a time of war is protecting U.S. citizens, the President has inherent authority to subordinate independent government agencies, and plenary power to use force abroad.[5] 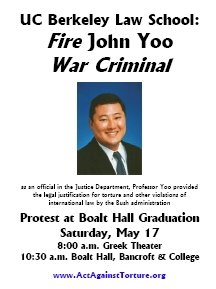 John Yoo has been subject to opposition by students of UCB because of his war criminal status and support for torture.