Kees van der Pijl is a Dutch political scientist who gave up his status as Emeritus Professor of International Relations at the University of Sussex after refusing to retract a link to 9-11/Israel did it article on this website.[1] On 3 November 2018, Kees van der Pijl had tweeted:

"Not Saudis, Israelis blew up Twin Towers with help from Zionists in US govt." The tweet included a link to the article 9-11/Israel did it on this web site.[2]

Kees van der Pijl studied law at Leiden University from 1965 to 1967. After military service as a reserve officer in the Royal Dutch Military Police, and a trip through the Soviet Union to Japan in 1970, he switched to political science, a specialisation taught in Leiden as part of the public law degree. His most influential teachers were Hans Daalder, Ben Sijes, and the Indologist, J.C. Heesterman, with whom he wrote his final thesis on the politics of regional diversity in India. He graduated in 1973 and was hired as a junior lecturer by the Department of International Relations at the University of Amsterdam in that year. In 1983 he received his doctorate at the University of Amsterdam on a thesis titled Imperialism and Class Formation in the North Atlantic Area, supervised by Gerd Junne. He was involved in the Communist Party of the Netherlands (CPN) and also published short stories and three novels (1989, 1992, 1994, all with De Harmonie). Van der Pijl was co-director of the Research Centre for International Political Economy (Recipe) from 1992 to 1998. With Henk Overbeek, Ries Bode, Otto Holman, Bastiaan van Apeldoorn and others, this created a tentative Amsterdam School of global political economy.[4][5]

In 2000, Van der Pijl moved to the United Kingdom to take up the chair in international relations at the University of Sussex, vacant after the retirement of Professor Michael Nicholson. He was appointed director of the Centre for Global Political Economy[6] (CGPE) at that university when it was launched in 2001 (until 2006), and was subject chair/head of the Department of Politics and International Relations from 2002 to 2004. In 2006 he was awarded a Leverhulme Major Research Fellowship. He has taught as a visiting professor at the University of Auvergne at Clermont-Ferrand (2005, 2006) and at the L’Orientale University in Naples (2009, 2010). His work has been nominated for prizes in 2007 and 2008 and he was awarded the Deutscher Memorial Prize in 2008 for Nomads, Empires, States (Pluto 2007).[7] On his return to the Netherlands he joined the Dutch Anti-Fascist Resistance (AFVN/BvA, issued from the wartime communist underground). He served as its president from 2013 to October 2015 and was involved in launching a Committee of Vigilance Against Resurgent Fascism of which he is the current president. 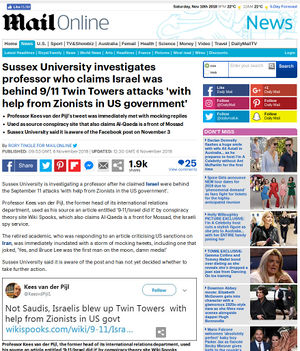 Kees van der Pijl stated that Israel was behind the 9/11 attacks "with help from Zionists in the US government", linking in the “9-11/Israel did it” page on this website:

"This article presents evidence that the Israeli deep state was the prime mover in the events of 9/11. Note that it does not imply that other groups (i.e. the US deep state and maybe others) were not involved in both the commission and cover-up of the September 11 attacks.

"The 9/11 event advanced the neocon Project for the New American Century (PNAC) agenda, with its explicitly stated need for 'a catastrophic and catalysing event - like a new Pearl Harbor' in order to mobilise US public opinion for already planned wars, the effects of which would be to destroy Israel's enemies."[8] 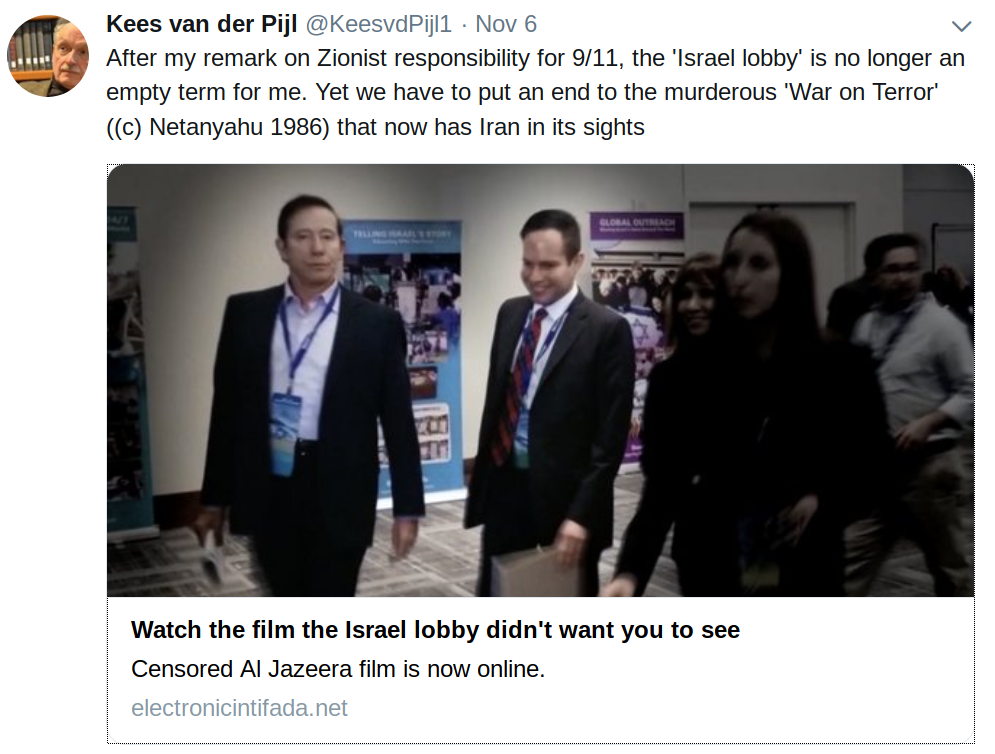 This page imported content from Wikipedia on 7 November 2018.
Wikipedia is not affiliated with Wikispooks.   Original page source here
Retrieved from "https://wikispooks.com/w/index.php?title=Kees_van_der_Pijl&oldid=220483"
Categories: