Luke Akehurst is a New Labour member who, in 2016, failed to be elected to Labour's National Executive Committee. He was strongly opposed to Leader of the Labour Party Jeremy Corbyn.

On 6 June 2017, We Believe in Israel and the Israel Britain Alliance published a list of the 216 candidates in the UK/2017 General Election who had signed the Pledge for Israel. 53 of the candidates were Conservatives, 52 Labour, 40 Liberal Democrats, 26 UKIP and 45 from other parties. Thousands of activists from a range of pro-Israel groups sent emails to their local candidates to ask them to support the campaign.

Luke Akehurst, Director of We Believe in Israel, said:

“It is great to see cross-party support from a range of parliamentary candidates for these important pledges about Israel, which include commitments to opposing boycotts and supporting the International Holocaust Remembrance Alliance (IHRA) working definition of antisemitism, which defines which forms of extreme anti-Israel discourse cross the line into antisemitism.”[1] 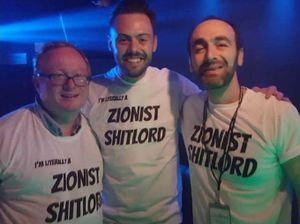 Now that the left-wing grassroots movement to reclaim Labour, spearheaded by Jeremy Corbyn, has been smashed, the party’s neoliberal centrists are seeking to reassert their control. The party bureaucracy conducting political purges under the guise of enforcing anti-discrimination rules is a key part of the right-wing effort to re-establish dominance.

All the contenders to succeed Corbyn as leader have agreed to the Israel lobby’s demands to purge the party.

A regular contributor to the Labour List blog, Luke Akehurst wrote on 21 June 2016:

I don’t know where to begin.

Before Thursday last week politics felt vile enough already, with a referendum campaign already characterised by Vote Leave leaflets delivered to every household in the country lying about the possibility of Turkey joining the EU as a kind of dog whistle to racists and Islamophobes.

And then on Thursday Jo Cox’s murder reminded us all that there is actually evil lurking on the fringes of our national political life.

There are not many people who are evil enough both to embrace fascism and race hatred, and even fewer who would take their ideology and put it in to practice by shooting and stabbing a young mum for having the temerity to be an elected democratic socialist politician and care about refugees and community cohesion. But it only took one man prepared to put ideology into savage action to take away two little children’s mother and a community’s democratically elected voice.[4]

On 13 May 2020, Luke Akehurst wrote an article entitled "The process and politics of picking Labour’s General Secretaries". Akehurst gave no indication of his pick for General Secretary of the Labour Party to succeed Jennie Formby.[5]

Right-wing ‘Labour First’ activist and proud enemy of the left Luke Akehurst has been firmly routed from his position as membership secretary in Oxford East CLP and replaced by two left wing party activists: Jane Stockton and Dan Iley Williamson – who is also a Councillor and the secretary of the Oxford Momentum branch – with a healthy majority. At the same meeting, which was attended by well over a hundred branch delegates, some other left-wingers were elected to positions on the executive.[6]