Midge Decter (née Midge Rosenthal) is one of the original drivers of the neo-conservative movement with her spouse, Norman Podhoretz. With Donald Rumsfeld, Decter is the former co-chair of the Committee for the Free World and a founder of the Independent Women's Forum. She is the mother of right-wing syndicated columnist, John Podhoretz. Her first job was secretary to the editor of Commentary, the intellectual magazine published by the American Jewish Committee. She later worked as an assistant editor at Midstream magazine, managing editor at Commentary, editor at Harper's Magazine, and was an editor at Legacy Books and at Basic Books.

According to Jim Lobe:

"Podhoretz and his spouse, Midge Decter, a polemical powerhouse in her own right, created a formidable political team in the 1970s as they deserted the Democratic Party, and then, as leaders of the Committee on the Present Danger — like PNAC a coalition of mainly Jewish, neo-conservatives and more traditional right-wing hawks like Defense Secretary Donald H. Rumsfeld — helped lay the foreign-policy foundation for the rise of Ronald Reagan. [1]

“We're not in the Middle East to bring sweetness and light to the world. We're there to get something we and our friends in Europe depend on. Namely, oil.”
Midge Decter (21 May 2004)  [3] 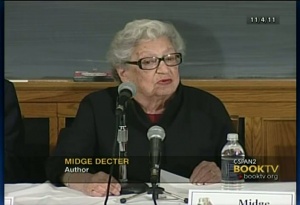 +
Has image2
File:Midge_Decter.jpg +
Has namebase
http://www.namebase.org/main3/Midge-Decter.html +
Has nndb
http://www.nndb.com/people/376/000052220/ +
Has noRatings
0 +
Has objectClass
Person +
Has objectClass2
Person +
Has powerbase
http://www.powerbase.info/index.php/Midge Decter +
Has religion
Jew +
Has revisionSize
5,713 +
Has revisionUser
Robin +
Has sourcewatch
http://www.sourcewatch.org/index.php/Midge Decter +
Has spouse
Norman Podhoretz +
Has wikipediaPage
https://en.wikipedia.org/wiki/Midge Decter +
Has wikipediaPage2
https://en.wikipedia.org/wiki/Midge_Decter +
Is not stub
true +
Has subobject"Has subobject" is a predefined property representing a container construct and is provided by Semantic MediaWiki.
Midge Decter +