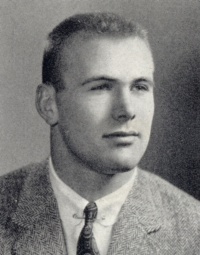 Donald Rumsfeld is deep politician, a senior member of the cabal and a former US Defense Secretary. He was listed as #4 on a list of top 43 Appointees Who Helped Make Bush The Worst President Ever.[1]

Rumsfeld was a roommate of Frank Carlucci at Princeton University where he graduated in 1954 with a degree in political science.

In January 1981, as CEO of Searle, Rumsfeld reportedly stated that he would “call in his markers” and make a push to get aspartame approved. Rumsfeld had reportedly hand picked Dr. Arthur Hull Hayes Jr. to be the new FDA Commissioner for the new president, Ronald Reagan. Hayes appointed a 5-person Scientific Commission to review the safety of aspartame, which voted 3 – 2 decision against, a decision which was recersed in 1981.[2] In December 1983, still working for G.D. Searle & Co., Rumsfeld wa sent by Ronald Reagan to visit the Middle East, including Saddam Hussein.

Rumsfeld on the day of 9-11 was United States Secretary of Defense. On the day before, a Monday, explaining difficulties the Pentagon had in accounting for its funds, he announced that "According to some estimates, we cannot track $2.3 trillion in transactions."[3]

When asked about the demolition of WTC 7, Donald Rumsfeld claimed that he had never heard of it.[4]

Retired 4-star general Wesley Clark (former supreme commander of NATO forces in Europe 1997-2001) stated the US military had already formed plans to invade 7 countries in and around the Middle East:

In 2001, in the Pentagon, a general told me : ‘I just received a classified memo from the Secretary of Defense [Rumsfeld]: we will take seven countries in five years, starting with Iraq, then Syria, Lebanon, Libya, Somalia, Sudan and finally, Iran.’[5]

Rumsfeld has been an active promoter of the "War on Terror". 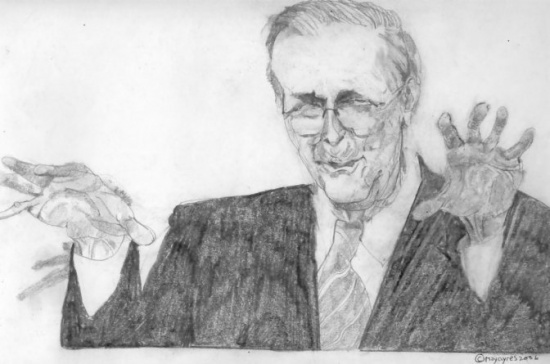 May Ayres' piece, 'A master teller of feary tales'

Donald Rumsfeld was an enthusiastic supporter of "enhanced interrogation", and his tenure as US Defense Secretary was marked by torture and the events of Abu Ghraib. He was convicted for these crimes in 2012 by the Kuala Lumpur War Crimes Commission.[6]

In June 2013 the US Supreme Court confirmed a federal appeals court ruling by ruling that Rumsfeld cannot be held liable for any illegal actions of his subordinates. He was being sued for personally authorising "enhanced interrogation" techniques, the court ruled that US military officials are immune to civil lawsuits over torture.[7][8]