Roland Vincent (Tony) Carnaby was a member of the CIA/US/Deep state and president of the Houston Chapter of the AFIO[1][2] whose cover involved running a security business based in Houston, Texas. He has business connections in the Lebanon. He was killed for unclear reasons in 2008 by US Police at the end of a high speed car chase.

Carnaby was born in 1956. He was a was a Lebanese-American[3] and spoke fluent French and Arabic.[4]"His father had been Lebanese ambassador to several nations... His uncle Boudi was Army Intelligence in World War II and appears on the Association for Intelligence Officers’ CIA Wall of 83 Stars and OSS Memorial."[5] 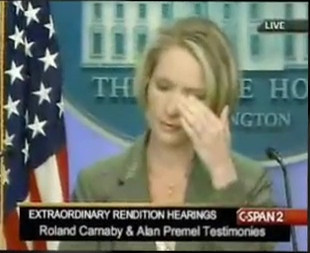 A snapshot from a photo montage about Roland Carnaby from YouTube.[6]

"Carnaby had worked for the agency in Beirut and was captured by Hezbollah [in] 1984. After Carnaby’s capture, his boss, William F. Buckley, was captured, tortured, and murdered. Carnaby was returned in an prisoner exchange arranged by the Lebanese government."[7]

"WayneMadsenReport, "Carnaby testified to DC Grand Jury on information about WTC 93 bombing... WMR has obtained further information on the suppression of evidence in the 1993 World Trade Center bombing. WMR has reported the bombing was carried out as the result of a fatwa issued by top Saudi clerics in response to the January 1993 "Mecca Incident" in which 18 U.S. military personnel assigned to Saudi Arabia were shot to death by Pakistani guards at the Islamic holy shrine in Mecca after the Americans attempted to storm into Kabaa Square while drunk and disorderly...

WMR Carnaby was also working with the Joint Terrorism Task Force in Houston, as well as the CIA's Counter-terrorism Center (CTC) in attempting to beef up security for the Port of Houston. Carnaby, WMR has learned, was involved in conducting security surveys of the port and discovered that the Department of Homeland Security had tolerated gaping holes in port security. full article

1980 - With a successful family business under his wing and a cover which is funding operations overseas Carnaby surfaces in New York, in Beirut and in Tehran and it all was tied into drug trafficking and the CIA to the Mujahedeen. Years later in Zacharias Moussaoui details how they were funded throughout the 1980's by the CIA.

1999 - Before it was called the Clandestine Service it was called the Directorate of Operations. Premel is linked to a failed operation overseas in Eastern Europe. The reports and speculation of him being tied to Chechnya and Shamil Basayev start. Insiders say that there was three failed attempts on Basayev's life and that he was unsuccessful in three attempts. Reason given for the failed attempts is intelligence leaked from CIA to Russian Intelligence services regarding the arrival of a joint team of officers into the region. As the story goes Premel was forced to leave the office in which he worked as a young case officer on his first assignment overseas.

2001 - September 11, 2001. Alan Premel is seen on surveillance video footage at the Austin International Airport in Austin Texas pulling up in a small truck behind three DoD buses which were later reported to be the NSA - National Security Agency moving 100 analysts to a remote location outside of DC to set up operations at the University of Texas. Premel now on an unpaid leave is seen reporting to the airport three full hours after the attacks. Sources in 2008 are now coming out and revealing that Carnaby had close personal contact and was a 'Known Acquaintance' around hijacker Mohammed Atta. Karnabe Shipping is used in conjunction with Karam Motors, Atta's cover company he uses based out of two cities and HQ'ed in Orlando to fund and run operations. As Carnaby and his father once testified in front of Congressional Grand Juries on the 1993 attacks here we can see him once again "[8]

In 2007/2008 Roland Carnaby was named as president of the Houston chapter of the AFIO at http://afiohouston.com.[9]

On the afternoon of Tuesday, April 29, 2008, Carnaby was "stopped for speeding along State Highway 288 by a Houston cop intent on arresting him for something. Carnaby, a Lebanese American, had made the fatal mistake of telling that police officer that he worked for the CIA."[10] His vehicle was owned by the National Security Command Center.[11] He also showed a CIA card. 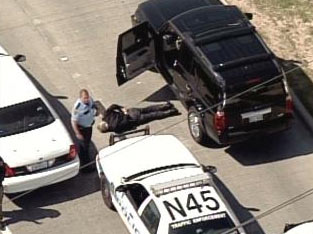 "After checking out Carnaby’s background via his squad car radio and computer, and failing to confirm Carnaby’s tall story, the police officer returned to the black Jeep and asked Carnaby, 52, to step out of his vehicle, with an arrest imminent, for something, which would be determined later (maybe failure to show the cop his concealed gun permit, or maybe impersonating a federal agent)."[10]

When asked to step out of the car after being stopped for speeding, Roland Carnaby sped off,[10] as shown by dashcam footage.[12]

A car chase with speeds of up to 120 mph ensued which ended 50 minutes later when Carnaby's car ran out of fuel. Officers broke a window of his car with a nightstick and Carnaby left the vehicle. He was shot in the back[13] and died after 12 minutes lying on the road. Footage of the shooting has been posted on YouTube.

Federal credentials also were found in his vehicle,[14] although detectives said that both the CIA and the FBI continue to vehemently deny his employment with the agencies.[15] Carnaby claimed to have been a CIA operative, an assertion that has yet to be refuted, but is doubted by investigators.[16] Inside Carnaby’s black Jeep SUV were two handguns, a shotgun, various CIA credentials, a laptop computer and a book called the Divided Life.[17]

Gordon Duff wrote in August 2019 that Carnaby "was killed by a police officer in what we are told was a Mossad “hit,”"[18] 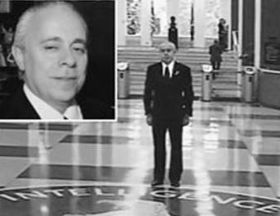 An image of Carnaby in CIA HQ?

The CIA, responding to a Freedom of Information Act request filed by the Houston Chronicle for “any and all materials” related to Carnaby, said that a 17-month search found no materials. Notwithstanding the CIA credentials found in his car, Carnaby has since been portrayed as a sort of 'Walter Mitty' CIA wannabe. This is widely disputed,[19][20][21] and reminiscent of the CIA's flat out lie in court about Edwin Wilson during the Arms for Libya case. 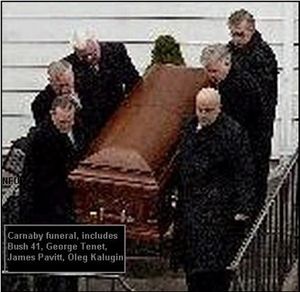 "Carnaby funeral. pallbearers: former President George Bush Senior at the front, Former KGB general Oleg Kalugin who was in Houston in November 2007 by invitation of Roland Carnaby. On the back row, James Pavitt, other side George Tenet in the back row, in the middle an unnamed US policy maker and on the front an unnamed Lebanese officer."

Carnaby's wife was reportedly intending to sue the Houston Police Department, stating that failed to provide medical treatment after having shot him, resulting in his death.[22] The suit also claims police used excessive force by breaking Carnaby's car window and firing their weapons. [23] His wife retained the services of Houston attorney Randall Kallinen, who alleges that the officers involved in the fatal shooting had a checkered record. "The police officers involved in this particular shooting have a history of serious disciplinary actions by the Houston Police Department," Kallinen told 11 News.[24]

Wikipedia made a short page for Carnaby, but it was deleted on 26 Jul 2008, amid claims that only the manner of his death was notable.[25]

The CIA denied that he was an employee (echoing their mendacious denial of Edwin Wilson), but a mound of evidence suggests otherwise. At his funeral George H. W. Bush was a pallbearer[26] possibly an indication that his death was due to a mistake rather than a US deep state assassination. A leaked Stratfor email published at Wikileaks mentioned that "A lot of us have in one way or another spoken to this guy and he have met him in the office."[27]

30 November 2018 Robin  Maybe the best page on WWW about this deep state operative
This is far from the final word, but gives a good introduction to this member of the US deep state who was killed by US police.