Membership is not limited to Former Intelligence Officers.

"AFIO members subscribe to the US intelligence community’s core values of patriotism, excellence, integrity, dedication and loyalty. By understanding the history of intelligence from its ancient world underpinnings to twenty-first century wizardry, AFIO’s key objectives and principles are to support today’s needs and foster forward thinking for:

Joël van der Reijden notes that both Richard Helms and Theodore Shackley were leading figures in the AFIO until both died in 2002.[2] Charles A. Briggs was chairman of the board of the AFIO for 4 years.[3] George H. W. Bush is honorary chairman of AFIO. Frank Carlucci is honorary director.

The AFIO and David Atlee Phillips sued Donald Freed, Fred Landis and the publisher after their 1980 book Death in Washington, named David Atlee Phillips as being involved in a cover-up of the 1976 assassination of Orlando Letelier and reiterated Gaeton Fonzi's claim that Phillips served as Lee Harvey Oswald's case officer while using the alias 'Maurice Bishop'.[5] A settlement was reached in 1986 with Phillips receiving a retraction and an unspecified amount of money.[5] 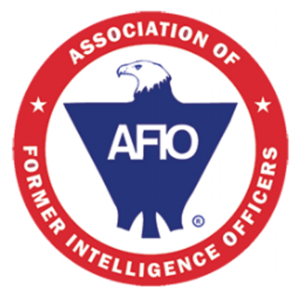