The Russian apartment bombings (also called the 9/99 bombings[1]) were a series of bombings that demolished 4 apartment blocks in the Russian cities of Buynaksk, Moscow and Volgodonsk in September 1999, killing 293 and injuring over 650. They occurred in Buynaksk on 4 September, Moscow on 9 and 13 September, and Volgodonsk on 16 September, during which time several other bombs were defused in Moscow.

The bombings ceased after the Ryazan incident in which suspected FSB agents were seen with a sack of white powder and timing device in the basement of an apartment block. The Russian Dumas forbade an investigation into the incident, and sealed relevant records for 75 years. The Russian government blamed them on Chechnyan separatists, providing a casus belli for the invasion of Chechnya. Others such as Alexander Litvinenko have claimed that they were a false flag attack by a deep state FSB cell. Sergei Kovalev headed a commission to investigate this but was abandoned after sudden deaths among its staff. Some journalists have also suffered a similar fate.[2]

The Russian government blamed the bombings on Chechnyan separatists, and initially this was widely believed; public support for a full scale war on Chechnya grew. The Second Chechen War was ongoing during the event, having started on 26 August 1999. In a foreshadowing of 9/11, domestic support for former FSB Director Vladimir Putin also grew, assisting his appointment as acting Russian President on December 31, 1999. Chechen separatist Ibn al-Khattab masterminded the murders.

The supposed culprit, Ibn al-Khattab, on September 14, 1999, Khattab told the Russian Interfax news agency in Grozny that "We would not like to be akin to those who kill sleeping civilians with bombs and shells."[3] The FSB assassinated him by exposing him to a poison letter.

Former FSB agent, Alexander Litvinenko claimed that the Russian apartment bombings were a false flag attack by the FSB[4] as did Boris Berezovsky made a film promoting this view. Both suffered sudden and suspicious deaths. Edward Jay Epstein also supports this theory.[5] 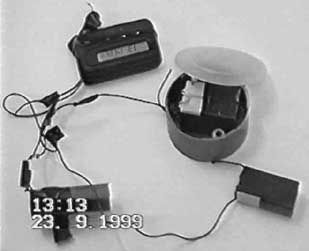 On 22 September 1999, a bomb was found and defused in the Russian city of Ryazan. Two days later Federal Security Service (FSS) Director Nikolai Patrushev announced that the Ryazan incident had been a "training exercise"[6] although local FSB denied all knowledge. Alexander Litvinenko, Boris Berezovsky and Edward Jay Epstein have cited this as evidence that the FSB were responsible for the bombings. The Ryazan Incident marked the end of the bombings.

On 13 September, just hours after the second explosion in Moscow, Russian Duma speaker Gennadiy Seleznyov of the Communist Party announced:"I have just received a report. According to information from Rostov-on-Don, an apartment building in the city of Volgodonsk was blown up last night".[9][10][11][12] However, the bombing in Volgodonsk took place three days later, on 16 September. When the Volgodonsk bombing happened, Vladimir Zhirinovsky demanded an explanation in the Duma, but Seleznev turned his microphone off.[9] Vladimir Zhirinovsky said in the Russian Duma: "Remember, Gennadiy Nikolaevich, how you told us that a house has been blown up in Volgodonsk, three days prior to the blast? How should we interpret this? The State Duma knows that the house was destroyed on Monday, and it has indeed been blown up on Thursday [same week]... How come... the state authorities of Rostov region were not warned in advance [about the future bombing], although it was reported to us? Everyone is sleeping, the house was destroyed three days later, and now we must take urgent measures..." [Seleznev turned his microphone off].[13]

Two years later, in March 2002, Seleznyov claimed in an interview that he had been referring to an unrelated hand grenade-based explosion, which did not kill anyone and did not destroy any buildings, and which indeed happened in Volgodonsk.[14][15] It remains unclear why Seleznyov reported such an insignificant incident to the Russian Parliament and why he did not explain the misunderstanding to Zhirinovsky and other Duma members.[14]

FSB defector Alexander Litvinenko described this as "the usual Kontora mess up": "Moscow-2 was on the 13th and Volgodonsk on 16th, but they got it to the speaker the other way around," he said. Investigator Mikhail Trepashkin confirmed that the man who gave Seleznev the note was indeed an FSB officer.[16]

An independent public commission to investigate the bombings, which was chaired by Duma deputy Sergei Kovalev, was ineffective because the Russian government refused to respond to its inquiries.[17][18]

Two key members of the Kovalev Commission, Sergei Yushenkov and Yuri Shchekochikhin, both Duma members, have since died in apparent assassinations in April 2003 and July 2003, respectively.[19][20] Another member of the commission, Otto Lacis, was assaulted in November 2003[21] and two years later, on 3 November 2005, he died in a hospital after a car accident.[22]

The commission asked lawyer Mikhail Trepashkin to investigate the case. Mr. Trepashkin reports that the FSB promised not to arrest him, his supervisors and staff if he left the Kovalev commission and started working together with the FSB "against Alexander Litvinenko".[23] Trepashkin declined and kept working, uncovering evidence that the basement of one of the bombed buildings was rented by FSB officer Vladimir Romanovich and that the latter was witnessed by several people. Mr. Trepashkin was unable to bring the alleged evidence to the court because shortly before he was to make his findings public he was arrested in October 2003 for illegal arms possession.[24] He was sentenced by a Moscow military court to four years imprisonment for disclosing state secrets.[25] Amnesty International issued a statement that "there are serious grounds to believe that Mikhail Trepashkin was arrested and convicted under falsified criminal charges which may be politically motivated, in order to prevent him continuing his investigative and legal work related to the 1999 apartment bombings in Moscow and other cities".[26] Romanovich subsequently died in a hit and run accident in Cyprus.[citation needed]

Some of those who have challenged the Russian government's official narrative of the bombings have been assassinated.

Artyom Borovik told Grigory Yavlinsky that Borovik investigated the Moscow apartment bombings and prepared a series of publications about them.[27] Mr. Borovik received numerous death threats, and he died in an aeroplane crash on 9th March 2000.[28] Journalist Anna Politkovskaya who blamed the FSB for the bombings, was gunned down in front of her apartment in 2006.[29]

Alexander Litvinenko and co-authors named Maxim Lazovsky as a suspect in the Russian apartment bombings (along with other crimes including murders and kidnappings). He was poisoned by polonium and died on 23 November, 2006. A month earlier Russian diplomat Igor Ponomarev died suddenly, (reportedly of a heart attack, aged 41) and his death has been linked to the murder of Litvinenko.[30]

In February 1996, Maxim Lazovsky was detained by the Moscow Criminal Investigation department (MUR) and accused of various criminal activities together with the Moscow FSB employee Alexey Jumashkin and six other FSB employees. In 1997 Lazovsky was convicted to two years for illegal possession of drugs and weapons. He was released in 1998. On April 28, 2000, Lazovsky was shot by assassins on the entryway of a church in the village of Uspenskoye near Moscow, where he lived. Yuri Felshtinsky and Vladimir Pribylovsky later accused Lazovsky of helping stage the 1999 Moscow bombings.[31]

On December 9, 2002, Novaya Gazeta published an open letter from Yusuf Krymshamkhalov and Timur Batchaev, Karachai suspects in the 1999 apartment blocks bombings in Moscow and Volgodonsk, to the commission for investigation of this event. In the letter, they claimed that German Ugryumov had supervised the bombing campaign on behalf of the FSB,[32] and included an interview with one of main proponents of this theory, historian Yury Felshtinsky. Felshtinsky had passed the letter to the newspaper, and alleged that Ugryumov had committed suicide, possibly under pressure from the FSB.[33][34]

As an interesting observation on the label conspiracy theory, people who are normally ruthless in denying any conspiracies behind similar things happening in the West, are freely accusing the Russian government of being responsible. For example, the whole Wikipedia article on the incident is laid out to conclude with a Russian government false flag operation.

Senator John McCain, who stated of 9/11 that "conspiracy mongering poisons the discourse and dishonors the victims"[35] had no problem in stating "Russia's FSB had a hand in carrying out these attacks. Mr. Putin ascended to the presidency in 2000 by pointing a finger at the Chechens for committing these crimes"[36].

Edward Lucas warns of "Russian-backed websites promote conspiracy theories [that] 9/11 was an “inside job"[37] but sees no danger in writing "The weight of evidence so far supports the grimmest interpretation: that the attacks were a ruthlessly planned stunt to create a climate of panic and fear in which Putin would quickly become the country's indisputable leader, as indeed he did."[38]