Professor Peter Dale Scott, a former Canadian diplomat turned academic, has been called the father[1] or the doyen[2] of deep politics. His work is highly recommended; this site owes more to his analysis than that of anyone else.

Peter Dale Scott is the son of Canadian poet and constitutional lawyer F. R. Scott and painter Marian Dale Scott, [3] he is known for his anti-war stance and his criticism of US foreign policy dating back to the Vietnam War.

Scott spent four years (1957-1961) with the Canadian diplomatic service. He retired from the UCB faculty in 1994. He is now an active researcher into Deep politics. He was a committee member at Cynthia McKinney's Dissertation Defense in 2015.[4]

Scott has earned a reputation for painstaking research and caution in his publications. He has been called a "virtuoso when it comes to what sometimes seems like grabbing smoke — capturing proof, however elusive, of motives and objectives that could explain the machinations of US intelligence agencies — and then analyzing the residue."[5]

Scott rejects the label of "conspiracy theory" and coined the phrase "deep politics" to describe his extensive investigations into the role of the deep state. Daniel Ellsberg commented about his book, American War Machine: Deep Politics, the CIA Global Drug Connection, and the Road to Afghanistan (2010), "I said of Scott's last, brilliant take on this subject, Drugs, Oil and War(2003), that 'it makes most academic and journalistic explanations of our past and current interventions read like government propaganda written for children.' Now Scott has written an even better book."[6]

The Road To 9-11 (2007), deals with historical and geopolitical context of the events of 9/11, and describes "how U.S. foreign policy since the 1960s has led to partial or total cover-ups of past domestic criminal acts, including, perhaps, the catastrophe of 9/11.[7]

An interesting aspect of Scott's work that combines both his investigating interests and his poetry is illustrated by Lobster Magazine article The Global Drug Meta-Group: Drugs, Managed Violence, and the Russian 9/11.

Scott has described his poem Minding the Darkness as his most important, though he concedes that "Like other long poems by older men. . . it toys dangerously with abstract didactic principles." Introductory matter to excerpts from Minding the Darkness. [8] The poem is intended as the culmination of a major poetic project of which Coming to Jakarta was the inception. 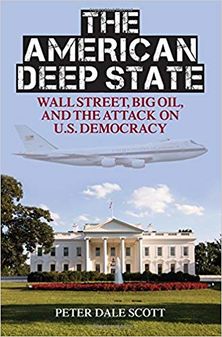