Sharmine Narwani is a commentator and analyst of Middle East geopolitics. 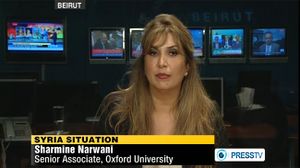 Sharmine Narwani has a master’s degree in International Relations (or possibly journalism)[1] from Columbia University.

From 2010 to 2014 Sharmine Narwani was a senior associate at St. Anthony's College, Oxford.[2][3] She has written commentary for a wide array of publications, including Al Akhbar English, the New York Times, the Guardian, Asia Times Online, Salon.com, USA Today, the Huffington Post, Al Jazeera English, The Real News Network,[4] BRICS Post and RT.[5]

“My friend, an engineer — who I will not name for obvious reasons and who I will call ‘Kourosh’ for the purpose of this article — revealed to me in 2010 that he was approached by two “State Department employees” who offered him $250,000 to “do something very simple” during his upcoming trip to Tehran.”
Sharmine Narwani (21 March 2019)  [6]