The United States has the highest incarceration rate in the world, over 700 prisoners per 100,000 citizens, with about twice that number on parole at any one time. Around 50% of US prisoners are locked up due to the "war on drugs" and thousands face life behind bars for non-violent offences.[1] Many commentators agree that USA is a police state[2][3][4][5], including:

While some patina of "due process" for investigating police violence remains in US, it is a moot point whether this is seriously intended to curb police malfeasance or primarily to quell citizens' resistance; police action (or inaction) speaks louder than any rhetoric about 'openness'. In March 2015, for example, Arizona passed a law preventing government agencies from releasing the names of police officers who seriously injure or kill people while on duty.[6] In June 2015, Counterpunch reported that US police authorities face a chance of less than 1% of being charged when they kill people, even unarmed people.[7]

In the process of attacking the Occupy Wall St protests, widespread illegal violence by the police was carried out and went more or less unpunished. MIT students in 2013 used FOIA to uncover heavily redacted documents about the Dallas occupy plot - revealing that the FBI either turned a blind eye to or actually abetted a plot to assassinate leaders of the Dallas Occupy movement. 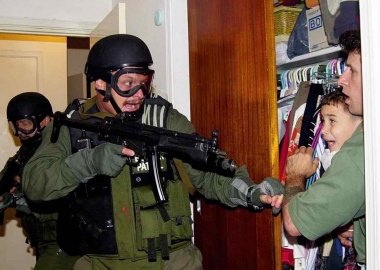 In recent years there have been innumerable reports of murders by police, some backed by videos.[8] US citizens are over 100 times more likely to be killed by police than UK citizens; in 2013 no one was fatally shot by on duty police in UK.[9] LAPD are averaging about one killing per week since 2000.[10]

In December 2013, 23 police officers fired at least 377 rounds at an immobilised car in what CBS described as a "shooting frenzy", killing the (unarmed) occupants and injuring others in the crossfire.[11]

In April 2014 it was reported that Police in Georgia forced a group of fifth graders to the ground at gunpoint as they attempted to build a tree fort in their own neighborhood. As the children lay face down, the officer allegedly screamed profanities and demanded they spread their arms and legs. The children's parent filed a complaint but the officer concerned remains on duty.[12]

In May 2014, a US police officer shot a 70 year old man at a traffic stop. He was placed on unpaid leave, but a spokesman defended the shooting as “appropriate” because the officer “felt an imminent threat to his life” - the man was getting out of his car and reaching for a cane in the truck bed.[13]

In November 2014, a US police officer who in 2010 had used his submachine gun to shoot and kill a 7-year old girl in her sleep was found not guilty of manslaughter after claiming in court that he had fired the weapon while temporarily blinded by a flash bang grenade thrown by another member of his SWAT team. While not disputing that he had fired the fatal shots, his defence lawyer claimed that "there is absolutely no evidence, none, that’s in the least bit credible, that Officer Weekley knowingly created a danger or, more importantly, intended to cause injury."[14]

On March 6, 2015 Aurora Colorado police shot and killed Naeschylus Vinzant. After months of ongoing 'investigation', police have refused to say why he was killed.[15] 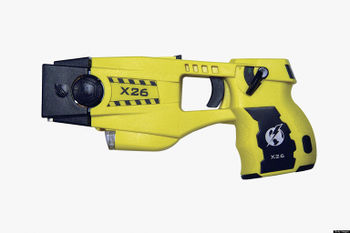 Repeated incidents reveal that "less lethal" weapons such as tasers are being used to torture or kill members of the US public by unrepentant (and commonly unpunished) police.[16] By 2011, an estimated 500,000 US police were carrying tasers.[17] RT reported in December 2017 that since 2000, over a thousand people, 9/10 of them unarmed, have been killed by US police with tasers.[18] Police have attempted to justify killing unarmed people either because their taser didn't work, so they used a gun instead, or even by shooting accidentally a gun instead of a taser.[19]

In 2014, Chicago police began use of a system not based on evidence of criminal activity but a computer based data mining approach that predicts crime probabilities.[20] 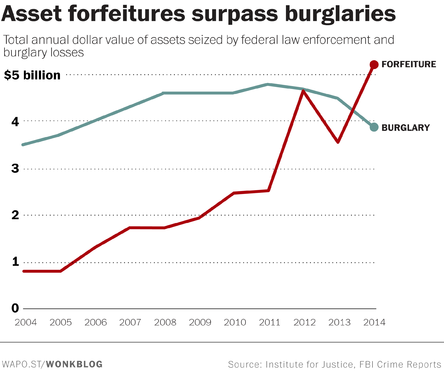 Since 2014, more property is taken by the US government using civil asset forfeiture than by all other parties combined.

The IRS has begun to use confiscate money based solely on suspicion, without specifying a criminal charge, effectively rendering people guilty until they can prove themselves (at their own expense) innocent.[21]

Many cities in USA have criminalized sitting or lying down in public spaces.[22]

In 2015, the Guardian reported discovery of Homan Square, a warehouse used by Chicago police as a "black site", for off the books kidnapping of citzens, where they were subjected to violent interrogation - resulting in at least one fatality.[23]