United European Jews (UEJ) is a pan-European organisation that performs research and advocacy concerning topics of Judaism, Jewish identity, and antisemitism. The institute was founded by Rabbi Mayer Weinberger of Belgium in conjunction with Jewish faith leaders throughout Europe.

The UEJ engages in educational activities which spread information and catalyse action and offers a view of Jewish identity that at its core is representative of the mainstream 70,000 Chareidi Jews that live in the UK, who do not identify with Israeli nationalism or politics as elemental to their Jewish identity.

The UEJ advocates the traditional Orthodox Jewish idea that Jewish identity is defined only by Jewish religious doctrine and is independent of foreign nationalist components. As British Jews, our home and country is the United Kingdom, and our religion is Judaism.

On 9 April 2019, Rabbi Mayer Weinberger wrote to Labour leader Jeremy Corbyn condemning attempts to report that a recent meeting between Corbyn and representatives of London’s Charedi Jewish community had been abandoned because of ‘outrage’ among the community.

The letter also records “our gratitude for your numerous acts of solidarity with the Jewish Community over many years” and thanks Corbyn for his support with recent issues with an unsympathetic coroner.[1] 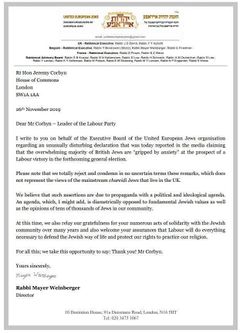 Following the Chief Rabbi’s comments and Jeremy Corbyn’s interview with Andrew Neil, allegations of antisemitism in the Labour Party have once again dominated the mainstream media.

But there’s one letter from a rabbi that probably won’t make headlines in most of the media. And it’s a letter that everyone who’s ever condemned Corbyn regarding antisemitism needs to read.

The letter, written to Jeremy Corbyn, is signed by Rabbi Mayer Weinberger on behalf of the Executive Board of the United European Jews organisation. It describes the Chief Rabbi’s comments that British Jews are “gripped by anxiety” at the thought of a Labour government as “unusually disturbing”. It continues:

"Please note that we totally reject and condemn in no uncertain terms these remarks, which does not represent the views of the mainstream Chareidi Jews that live in the UK."

The letter doesn’t pull any punches in regard to the reasons behind the attack on Corbyn, saying:

"We believe that such assertions are due to propaganda with a political and ideological agenda. An agenda, which, I might add, is diametrically opposed to fundamental Jewish values as well as the opinions of tens of thousands of Jews in our community."

And it thanks Corbyn for his:

"numerous acts of solidarity with the Jewish community over many years and also welcome your assurances that Labour will do everything necessary to defend the Jewish way of life and protect our rights to practise our religion."[2]