The 1930s was a time of increasing concern about fascism in Europe, and saw a failed fascist coup in the USA.

In the US particularly, widespread deprivation was labelled "The Great Depression". 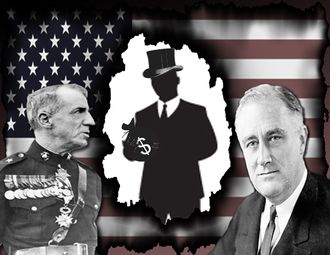 A cabal of Wall St businessmen organised a fascist coup in USA. Their conspiracy was exposed when the front man, General Smedley Butler blew the whistle on the group. The group used its control of the corporate media to try to airbrush the plot from the historical record, a New York Times editorial terming it a "gigantic hoax." and a "bald and unconvincing narrative."

Military build up in Europe

The 1930s saw a rise in fascism in Europe, and a large military build up. Some Wall St investors, such as Prescott Bush[citation needed] and Brown Brothers Harriman helped Fritz Thyssen finance Adolf Hitler.[1]

In 1939, Adolf Hitler's Germany staged a false flag incident, the Gleiwitz Incident, and then invaded Poland. UK and France declared war as a response.

In USA, an intense anti-marijuana movement coalesced with an anti-Chicano; since marijuana was associated with Mexican-Americans, a ban on marijuana was seen as a way of discouraging Mexican-American subcultures from developing.[2] The 1937 Marijuana Tax Act levied an almost prohibitive tax on the drug and it was alleged to be a "gateway drug" that lead to heroin use[3], as promoted by the film Reefer Madness.